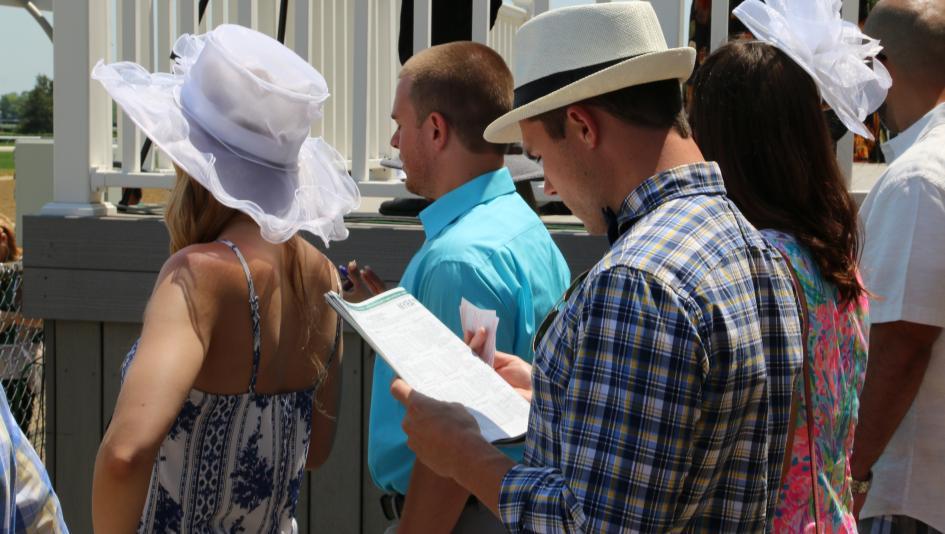 This week marks the latest installment of a new series on America’s Best Racing, the Beginner’s Bet of the Week, sponsored by NYRA Bets. Each week, this blog will explore a new type of bet by explaining exactly what it is, how best to use that bet, and by putting the wager into practice in a race.

Fall and winter horse racing awaits this weekend at tracks like Gulfstream Park or the famous Cigar Mile race at Aqueduct! With NYRA Bets, new users can enjoy a $200 Sign-Up Deposit Match Bonus anytime to bet it all. Just use promo code ABR200 and get in the action today! Be sure to tune into “America’s Day at the Races” running weekends on FS2, and sign up for this Saturday’s Cigar Mile Challenge with NYRA Bets.

This feature focuses on one of the most glamorous wagers in racing: The Pick 4. The objective of the Pick 4 is to select the winner of four consecutive races. It was originally introduced by NYRA in 2001 and now is offered twice a day at their tracks. The early sequence starts in Race 2 and the late sequence consists of the last four races each day. The minimum wager is 50 cents.

Like with all multi-race bets, the key to winning in the Pick 4 is finding which races to “single,” or use just one horse, and which races to “spread,” or use multiple horses. The natural instinct is to single in races with a very obvious favorite, but that isn’t always the best strategy.

The key to winning big in a Pick 4 is to try and use horses other people aren’t using. Since the payoffs are calculated by dividing the total pool by the number of winning tickets, the more people who win the lower the payoff will be. Singling an odds-on favorite might keep you alive in the sequence, but if everyone else is also using that horse, it won’t do much to boost the expected payoff.

As such, the best way to make money in the Pick 4 is to find vulnerable favorites who can be left off your ticket. The more favorites you beat, the larger the expected payoff. If you really like a horse who isn’t a favorite, singling them leaves you more opportunity to spread in races where your opinion isn’t as strong and to potentially catch a longshot.

I’ll focus on the early Pick 4, consisting of Races 2 through 5. The late Pick 4 features two probable heavy favorites, Lady Rocket in Race 7 and Mo Donegal in Race 8, neither of whom I’m comfortable going against. If both of them win it would depress the payoff, especially if low-priced horses also win the other two legs. The early Pick 4 has many wide-open races and, as such, is a more appetizing sequence.

Race 2 is a New York-bred maiden special weight race for 2-year-old fillies at 1 1/16 miles on the turf. I’ll take a shot against the morning-line favorite, #3 Robyn and Eli, who is stretching out around two turns for the first time and will almost certainly be overbet in a wide-open field. I’ll use seven horses in this race. #1 Sterling Mistress is a first-time starter who is a half-sister to Sport Model, a multiple stakes winner on turf. #2 I’ll Go All In closed impressively in her lone turf start. #4 Autumn Glory is a first-time starter for Christophe Clement, who is 20% with his debut runners under these conditions, #5 Regal Rebel is half-sister to two turf winners. #6 She’s a Natural ran a respectable speed figure in her debut and could improve second-time out. #7 Cape Cod Causeway is also a half-sister to multiple grass winners and gets hot-riding Jose Lezcano in the saddle. Finally, #8 Sweet Lies is a second-time starter for Graham Motion making her turf debut.

Race 3 is a second-level allowance-optional claiming race at six furlongs on turf. I’ll use two horses in here. #1 Guildsman has been facing stakes-quality horses all year and had a very wide trip last out at this level. He’s drawn to the inside and should get a much better trip. #5 Scuttlebuzz has a powerful closing kick and has won two of his last three starts. He won at this condition against New York-breds three races back and won a first-level race against open company last out.

The fourth race is a $16,000 claiming race at a mile on dirt. My ticket uses three horses in this race. #2 Direct Order consistently runs competitive speed figures. He races first time off the claim for Antonio Arriaga, who hits at 17% with that angle. #9 Regal Quality was claimed out of his last start by the hot Rob Atras barn and finished second in a similar quality race last out. The winner of that race, Hammerin Aamer, came back to win a $25,000 claiming race next out. Regal Quality is the morning-line favorite at 5-2, but he does not profile as an overwhelming choice and shouldn’t depress the payoffs too much if he wins.

The final race in the sequence is Race 5, a 1 1/16-mile maiden special weight race on turf for 2-year-olds. I’m closing out the sequence by singling a 10-1 shot: #2 Etheric. She got stuck behind a very slow pace in her debut at Laurel Park, falling 14 lengths behind at the half-mile point. Despite that, she weaved her way through traffic and rallied for third, beaten by two lengths. She’s been working well since that race for trainer Michael Dickinson and could turn in a big effort at a big price.

Southern Ocean storms cause outgassing of carbon dioxide – Watts Up With That?