Olympiad Should Get the Gold in Cigar Mile 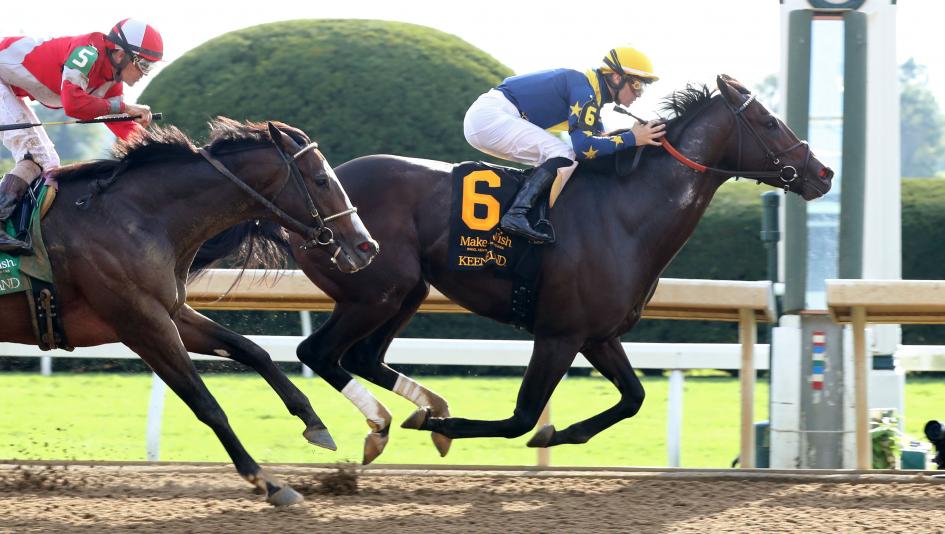 The $750,000, Grade 1 Cigar Mile Handicap Presented by NYRA Bets Saturday at Aqueduct is always a race to look forward to as we enter December, and the 2021 edition is no different.

In terms of achievements, the eight-horse field is led by multiple graded stakes winner Code of Honor with over $2.9 million in career earnings. However, Code of Honor has run just four times this year and his only win came in the Grade 3 Philip H. Iselin Stakes in August. Independence Hall enters the race off a win in the Grade 2 Hagyard Fayette Stakes at the end of October, but similar to Code of Honor he has just that one win to his credit in 2021 (from six races). Ginobili may be bringing the best recent credentials into this year’s Cigar Mile as he just finished second in the Grade 1 Big Ass Fans Breeders’ Cup Dirt Mile following a win in the Grade 2 Pat O’Brien Stakes. Then there’s a pair of horses untried at this level in Americanrevolution and Olympiad. Americanrevolution just won the Empire Classic Stakes by 11 ¾ lengths, while Olympiad won an allowance race in mid-October. Plainsman won the Grade 3 Ack Ack Stakes at the beginning of October before posting disappointing third-place effort as the favorite in the Grade 3 Bold Ruler Handicap at the end of the month. Following Sea won the Grade 2 Vosburgh Stakes the second week of October and then finished third of nine in the Grade 1 Qatar Racing Breeders’ Cup Sprint, and he may find these opponents a bit easier. Pipeline rounds out the field as a colt who earned his first career win in September before finishing third in the Perryville Stakes in October.

Olympiad is the most lightly raced horse in the field, having run just four races to date. Two were in 2020 as a 2-year-old where he finished third and then won by nearly three lengths at Saratoga. Olympiad was given a year off by Hall of Fame trainer Bill Mott, and the colt was a bit short of 100% as he finished second in his comeback race this September. His next race and his most recent on Oct. 14 was telling, as Olympiad controlled the pace in front from start to finish but even more notably held off a dogged rival throughout the stretch to win. He improved to a career best 106 Equibase Speed Figure from the 103 he posted one month earlier, and Olympiad appears to be on a pattern to take a big step forward. Jockey Joel Rosario, who rode Following Sea to victory in the Vosburgh Stakes in October and also rode Plainsman to win the Ack Ack Stakes that same month, has never ridden Olympiad but gets aboard for the first time. This is significant in my opinion because Rosario, whose 2021 earnings stand at over $32.9 million, has a chance to break the all-time yearly record for a jockey which stands at $34.1 million. As such, every mount through the end of the year takes on added significance, and so Rosario’s decision to ride Olympiad in a race where the winner’s share of the purse is $450,000 is yet another reason I think this colt can post the upset and win the Cigar Mile Handicap.

Ginobili enters the Cigar Mile coming out of the toughest last race of any other contender. He was not disgraced when finishing second of eight in the Breeders’ Cup Dirt Mile behind Life is Good. In that race, Life is Good was sent to the front on fractions which would be impossible for most horses to maintain, but still won by almost six lengths. Ginobili raced in fifth and fourth in the early stages before showing a burst of speed to get to second, and was even in range of the winner before Life is Good drew off in the stretch. That effort earned a 111 figure which is rock solid. Previous to that, Ginobili earned a 110 figure winning the Pat O’Brien Stakes in August. Those performances show this horse has what it takes physically and mentally to win this race.

Following Sea is another coming out of a big race, the Breeders’ Cup Sprint, where he finished third of nine. Although passed in the stretch by winner Aloha West, Following Sea had some traffic issues in the race as he was on the rail on the far turn and early in the stretch but lost his path. Jockey John Velazquez, who rides again in the Cigar Mile, had to angle the horse off the rail to find a path, and although the momentum Following Sea had lost earlier could not be totally regained, he did surge late to get third and earn a 107 figure. One race earlier in the Vosburgh Stakes, Following Sea earned a career-best 117 figure which is one of the highest in the field. One slight question is whether he will like this one-mile trip he is running for the first time as much as those two six-furlong sprints he recently ran. Other than that, Following Sea appears to have what it takes to contend for top honors in the Cigar Mile.