It should be so simple, but successfully wearing a blazer with jeans is anything but. It’s a look that combines the worlds of smart and casual, but in doing so presents a number of hurdles. Do it right, and you’re the image of Italian elegance. Get it wrong, and we’re in early-noughties Top Gear territory. So where to begin?

In order to pull it off you need to nail the details. The fabric, texture and cut all need to be spot on for starters, and don’t even think about wearing your regular suit jacket with denim. Need some further advice? We’ve got everything you need to know about combining a blazer with jeans, right here.

Why Men Struggle With Blazers & Jeans 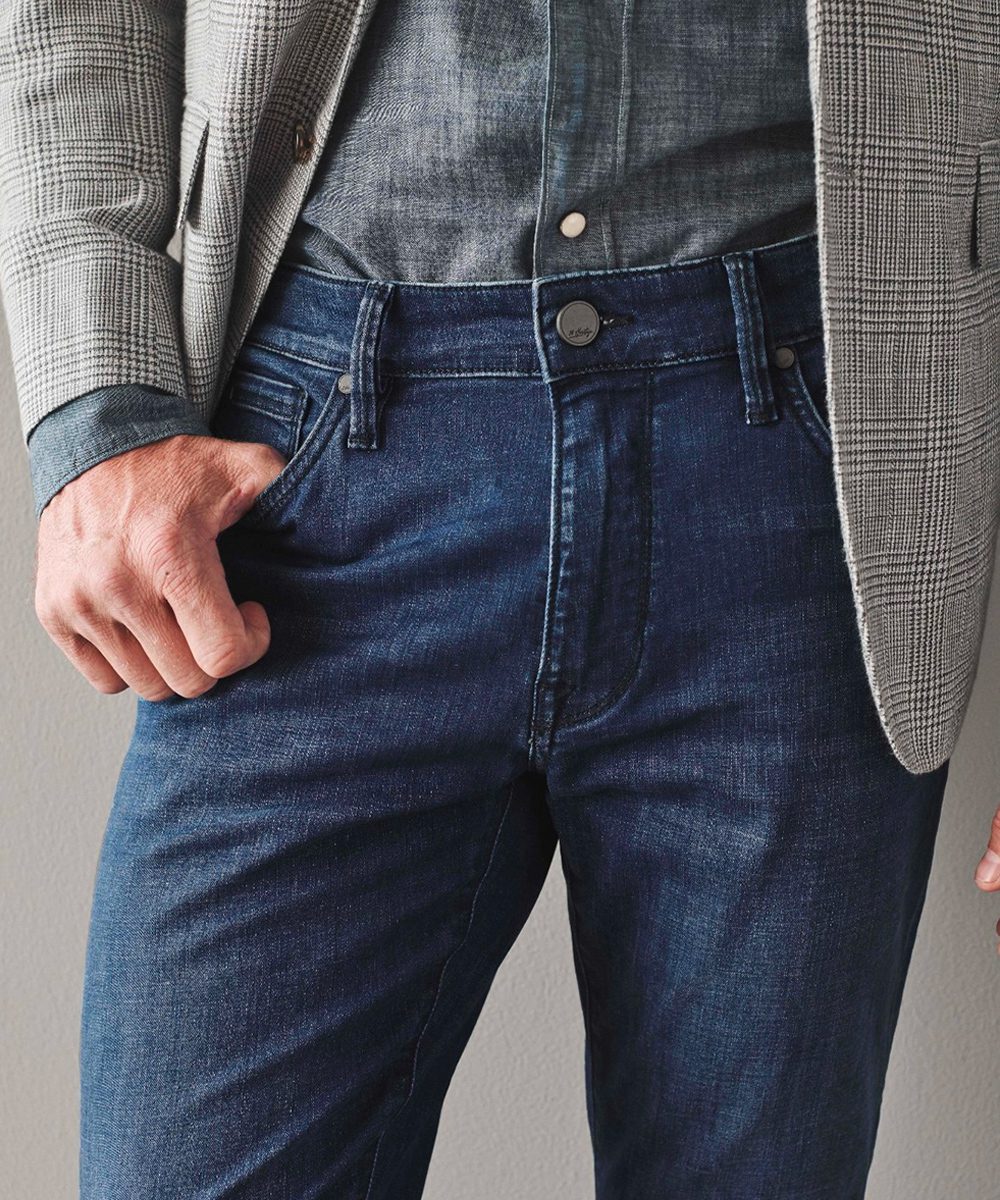 You can’t just wear any old blazer with jeans. The trouble many men have with it is they do just that. They might see a smart-casual dress code, and interpret it by cutting their wardrobe literally in half by combining their ‘smart’ suit with their ‘casual’ jeans. It just doesn’t work.

There are a number of reasons why doing this looks bad. Firstly, fabric. Formal suits are often made from worsted wools with smooth, flat handles that have little texture. These kinds of fibres are made for the boardroom, and when combined with denim – a fabric that typically has plenty of texture – they just look plain wrong. The contrast is simply too high.

Likewise, said suits are often made with a relatively strong, structured shoulder, which gives them their formal look. Again, this just jars when paired with denim, as the indigo fabric is far too rooted in casualwear.

Why You’d Want To Try It This all begs the question of why you’d bother trying to wear a blazer with jeans at all. It isn’t the easiest combination to pull off, so why not try something that’s actually attainable. Well, if you do it cleverly, wearing a blazer with jeans can bridge that ever-tricky smart casual-dress code, and it can be both effortless and comfortable.

When To Wear A Blazer With Jeans One of the main benefits of successfully combining a blazer with jeans is the looks’s versatility. It can be perfect for any number of social situations from date nights and working in the office, to pub lunches and strolls around town. It’s not too formal and not too laid back, working perfectly as an in-between outfit for times when you want to look presentable without being stuffy or overdressed.

So, what kind of blazer should you go for? For starters, and in order to match the casual nature of denim, your chosen blazer should be unstructured. Think lightweight, Italian-style cuts with soft shoulders, narrow arms and twin vents on the rear. Soft, unstructured shoulders are comfortable and won’t impose formality on you – it’ll feel more like you’re wearing a cardigan than a blazer. They also look less severe – the lack of padding means they’ll follow the natural line of your shoulders, as opposed to structured suits which create sharp (and smart), unnatural lines.

The blazer in question should also have a certain amount of texture to it. The fabric needs to complement denim, which itself has bags of texture thanks to its visible weave. Plus, it needs to look as though it isn’t one half of a business suit. Fabrics such as tweed, corduroy and herringbone wool are perfect for wearing with jeans, as they’re usually associated with laid back tailoring and casual wear.

If the blazer has the right cut, there are times when a flatter, regular wool can work with jeans. For a monochrome look consisting of indigo jeans, a navy T-shirt and black Derbies, a dark blue blazer adds an elegant, almost Parisian feel.

For the bottom half of your outfit, the number one rule is to pay attention to fit. As your jeans will be part of a relatively smart look, you’ll want the cut to be slim and tailored. They should flatter your legs rather than hug them though – go too slim and you’ll risk entering reality TV territory.

Again, dark indigo or black jeans are your safest bet, depending on what colour jacket you opt for. For blazers in shades of brown, beige, green or blue, go for dark blue jeans; whereas for a monochrome look, pair grey and charcoal blazers with black jeans.

For those wanting to branch out from the safety of dark washes, try pale or white denim – neutral shades that work best during the spring and summer months. Just remember to keep your jacket suitably lightweight and in keeping with these lighter tones. When it comes to wearing a blazer with jeans, it’s often easier to stick to classic colour combos you know are going to work. Opt for a failsafe pairing and combine a brown textured blazer with blue jeans, two colours which’ll always look good together. Finish the look with a darker brown overcoat, a complementary grey roll neck and brown leather Chelsea boots. Take your inspiration from classic British country clothing, which has always successfully combined texture, pattern and colours to achieve something elegant and playful. Look for an unstructured blazer in a tweed or gun check pattern, which nods to country-wear but updates it with a slimmer cut and modern details. This is where black jeans come into their own. Wear them with a patterned grey blazer and black roll neck for a monochrome look that’s effortlessly cool and easy to wear. Ideal for wearing to an expensive restaurant or cocktail bar, this outfit perfectly encapsulates what’s appealing about wearing a blazer with jeans in the first place.

An example of how wearing a smarter blazer with little texture can actually look good. The trick is in paying attention to the cut of the blazer, of course, but also in keeping the rest of the look tonal. For a dark blue blazer, wear it with jeans cut in dark or raw denim, and combine with a navy knitted crew neck, T-shirt or polo shirt. If you fancy going a bit bolder, try opting for a double-breasted blazer. The same rules apply as for single-breasted – that is, unstructured shoulders and texture if possible, which softens the formality of the cut. A more laid back alternative to a suit, try pairing one with a club tie and Oxford button-down shirt and finish with light wash jeans for a look that taps into the elegance of the French Riviera. For something more Ivy-league inspired, take a chalkstripe navy blazer and pair it with a cricket jumper, button-down shirt, mid-wash denim jeans and tassel loafers. Ideal as an autumnal smart-casual look, this timeless combination wouldn’t look out of place in a country hotel or a Friday afternoon in the office. Denim jeans make light work of dressing down a blazer, but why not go one stage further by combining the two with a knitted hoodie? Comfortable and easy to wear, a knitted hoodie is smarter and more luxurious than a traditional cotton version, ensuring it doesn’t look out of place when worn underneath a blazer. If you fancy making more of a statement, a blazer and jeans can easily do so. Channel 1970s Miami and opt for pastel hues consisting of a pale pink, relaxed-fit blazer, white striped shirt and pale-wash denim jeans. This is a look that requires a lot of confidence but, in the right scenario (think pool party in South Beach), it could make you the most stylish man in the room. Another way to wear a double-breasted blazer with jeans is to go the nautical-inspired route, replete with naval officer gold buttons. It’s a bold jacket, sure, but one that is unapologetic in its look and feel. Dressed down perfectly with mid-wash denim, it’ll work well in the warmer months when paired with other staples in white, red and blue. For summer, an all-white outfit consisting of jeans and a T-shirt can be quite the statement, but it’s perfectly softened by a lightweight, unstructured blazer in a complementary shade. Look for one in a grey herringbone weave, which adds a welcome bit of texture to an otherwise dazzling ensemble.

6 Best Business Casual Shoe Styles (& How To Style Them)

How to Go (Far, Far) Away—and What to Do There