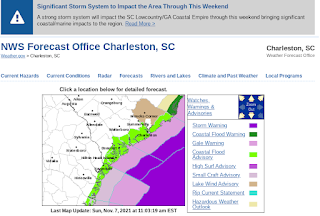 Charleston dealing with quite the coastal low.

Not designatred by the NHC in any way.

Then again they didn’t name it Wilma….

…til it was only an issue for the shipping lines.

Amazes me that the two best storms we have had were basically ignored yet several crappy “shortie” tropical storms that didn’t last more than a day or so were covered in depth by TWC and I suppose that’s the glory of having a name. If it doesn’t have a name, it’s less important; not the best logic and yes the NWS does a kick ass job but they do not get the attention the NHC does nor TWC gets when a storm is making landfall.  Shame Cantore didn’t get to go to St. Augustine for this one or any of TWC crew as it was a big storm and graphically very visual and beautiful for people who love weather and storms. 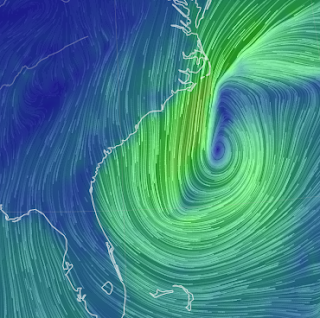 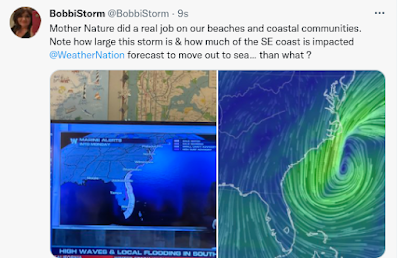 Satellite imagery is impressive too.. 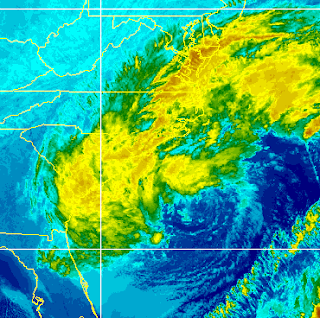 Shield of weather hitting the coast with bands….

Wrote the above in the morning/.

Went to the Farmers Market.

Rest of blog written after shopping… 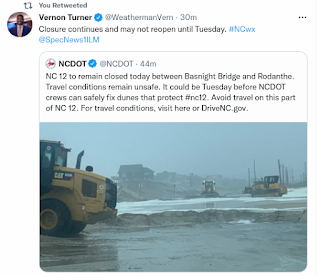 Now the NHC is putting up a yellow circle.

As was obviously the plan…

Wanda in fact wandered a long ways across the Atlantic.

After doing NE it came together enough for upgrade.

Now we have our new Yellow Circle…

Should have put the yellow circle up earlier.

In my opinion many sites indicated it was there..

(you know the ole purple blotch site I use)

I don’t know really what to say that would make any difference, I don’t understand weather channels sometimes. The “coastal low” also known as “offshore low” or “Carolina Low” because it has no real name is swirling off the coast of the Carolinas and Georgia. Wild weather along the coast from St. Augustine to the Outer Banks and every popular city in between such as Savannah and Charleston is dealing with photogenic and wild visuals yet no one is there to film them. Everyone knows I love TWC but honestly I turned it off today and put on Weather Nation on Roku which actually was showing good video people were sending in and discussing the wild, strong storm that does not have a name and apparently wasn’t worth sending people to cover on Sunday from TWC.  Again this storm is impacting many large coastal cities, I’m less interested in snow up in the mountains out west then something impacting a large population. I can put on videos on YouTube to gaze at early winter snow falling.

I still love TWC but I mute most of their incessantly annoying “how does this work” segments that are better covered by Ted Talks with less repetitive studio graphics and more emphasis on weather. One thing I used to love about them is that they didn’t dumb down the weather to the general audience, even if the on air mets joked around often, they really delivered the weather, live in real time. I miss that. Weather Nation is almost like watching old school TWC .. great satelite images, good radar, meteorological discussion, video from people who send in happening weather in real time and the music is light and interesting and best of all NO AGENDA. I’m a news addict so I spend most my day shuffling between CNN, FOX and MSNBC (on occasion) so when I watch the WEATHER channel I just want weather.

In today’s lingo online. Tell me you are annoyed without telling me?

In truth that is what the remote is for……. I watch TWC, I swtich to Weather Nation (they both have their strengths but if wweather happens on the weekend it seems TWC rarely covers it live. I’m not interested in canned shows that repeat too often when I could be getting live weather coverage. I also have Spectrum News in NC that does an amazing job of covering our weather and the wider spectrum every ten minutes.

I’m loving the cooler weather and even pulled the fake fireplace out of the closet and set it up in the bedroom. It’s almost as good as the fireplace videos from YouTube my daughter sends me.  I love winter and the change of the seasons and living in the Carolinas you really get to enjoy the change of the seasons and we get all food crazy with what local produce is at it’s prime. My maple tree is beginning to turn, but the tops of the trees are swaying when the wind picks up from gusts from the coastal storm.

So that’s it. I’m soooo ready for winter. When does it really begin?

Ps this cracked me up so much I could not stop laughing, had to totally redo my make up… apparently the eyeliner and mascara was not that waterproof… Thor posted it online and ironically after I had just switched from TWC coverage of not breaking weather events during a storm… this somehow totally hit the spot. Enjoy….  funniest thing I’ve seen since WKRP Turkey Drop…