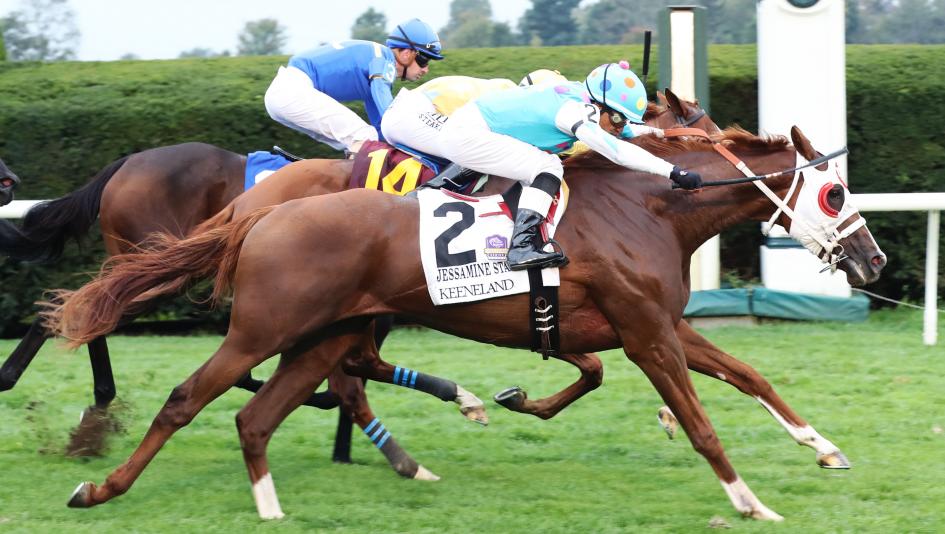 The 2-year-old California Chrome filly punched her ticket for the Grade 1 Breeders’ Cup Juvenile Fillies Turf Nov. 5 at Del Mar by winning the $200,000 Grade 2 JPMorgan Chase Jessamine Stakes over Diamond Wow Oct. 13 at Keeneland. The race was the final domestic race of the 2021 Breeders’ Cup Challenge Series, which provides automatic, paid berths into the Breeders’ Cup.

If California Angel is to repeat that success, she will need to travel farther to do it, but her connections of trainer George Leonard III and owner Chris Walsh are keen to try. She provided them with their first graded stakes wins.

“I thought I had a special filly from the beginning, but I never dreamed of being here and winning this,” Leonard said. “After she won (her Sept. 8 debut at Kentucky Downs), I heard all this talk, and we decided to try this. It’s just been a dream come true.”

They have a right to be optimistic. During her short career, California Angel has left them encouraged. An unraced maiden at the start of last month, she has quickly taken them to lofty heights. She won her debut at 28-1 at Kentucky Downs, followed that race with a closing third-place finish on dirt in an allowance optional claiming race at Churchill Downs, and then made the successful leap into stakes company Wednesday.

She showed she belonged. Twelfth of 13 early, as favored Turnerloose set the pace under pressure from longshot Ontheonesandtwos in the 1 1/16-mile grass race with fractions of :23.59, :47.73, and 1:13.31, California Angel swung into action down the lane. She advanced into eighth by midstretch and then passed seven rivals in the final furlong for a head victory over Diamond Vow. Turnerloose was another neck back in third.

It was another length back to Dressed, who was followed in order by Opalina, Roughly a Diamond, Misthaven, Kneesnhips, Bhoma, Queen Judith, Rigby, Boxing Day, and Ontheonesandtwos.

California Angel ($37.60) was timed over a good course in 1:44.30. The filly netted jockey Rafael Bejarano his 19th Keeneland stakes win and first since Oct. 8, 2010, when he took the Grade 1 Darley Alcibiades on Wickedly Perfect. The jockey returned to ride in Kentucky last spring after basing the prior decade in California.

“She had a good turn of foot today,” said Bejarano. “I just wanted to keep her out of trouble. (Down the stretch) I could have gone inside, but when I saw it was kind of tight, I wanted to get her clear and let her run. I know she was going to come running at the end. She did. She proved it today.”

Hall of Fame jockey Mike Smith, who rode runner-up Diamond Wow, was pleased with his filly’s effort from the outside post. She lost for the first time in three starts after going 2-for-2 at Gulfstream Park.

“The winner came from the two (post) and I came from the 13 post, and it hurt us distance-wise because I’d have to say I lost at least two lengths,” he said. “Both turns I couldn’t really get in, but she ran dynamite. I saw (California Angel) coming, but there wasn’t really a whole lot I could do about it.”

Florent Geroux said his mount, Turnerloose, ran well, but mild pressure she received while setting the pace compromised her late, leaving her with her first loss in three races. Her trainer, Brad Cox, said the Breeders’ Cup would still be considered for his stakes-winning trainee.

Bred in Kentucky by Irish National Stud, California Angel is out of the stakes-placed Tiz Wonderful mare Sea Mona. Both of her foals to race are winners. The mare, sent to Ireland in 2019, also has an unnamed yearling filly by Distorted Humor and foaled an Invincible Spirit filly this year.

California Angel sold as a weanling for $5,000 to 2 Stars from the Paramount Sales consignment at the 2019 Keeneland November Breeding Stock Sale, before Leonard bought her this summer for $5,500 at the Ocala Breeders’ Sales’ June Two-Year-Olds & Horses of Racing Age Sale. In Ocala, she had worked an eighth in :10 3/5 as part of the Little Farm Equine consignment.

“I liked her breeding, her athleticism,” Leonard said of his bargain acquisition. “I liked how she was made. She was made very sleek and muscular. And she walks like an athlete. I liked everything about her.”

This fall, she became the target of parties interested in buying her privately, but she remained owned by Walsh for Wednesday’s race.

“She doesn’t owe us a thing,” Walsh said. “I mean everything is up from here with her. George has been so high on her. She’s a horse of a lifetime for all of us, so why not have some fun?”

Best Bets: Saturday Focus on Turf at Keeneland and Belmont

Beginner’s Bet of the Week: The Across the Board Bet