Sam, still far out from the Islands.

Hurricane Sam that is this morning. 75 MPH. 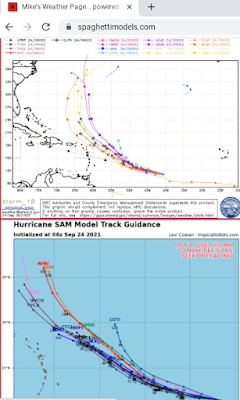 Models currently, mostly, curve him up before the Islands. Still nothing set in stone. Small storms are problematic as they are more likely to intensify up in intensity fast, and collapse just as fast. It’s making good use of it’s moisture as the feed visible on the Mimic loop is enough but not abundant for the MDR this time of year.  The MIMI also shows the cold front that has brought my temperatures and dew points down in the Carolinas moving very slowly waiting for reinforcements to kick it out. 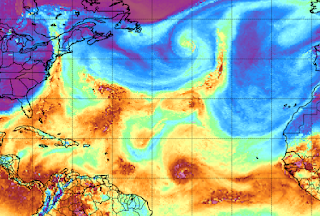 If you clicked on that link above you will see the dark blue colorful high pushing down on Sam at the top right of the image above. Shows you why Sam is Westbound for now. Also note “the front” across the East Coast seems to have halted progress but another one should kick it out as I said. 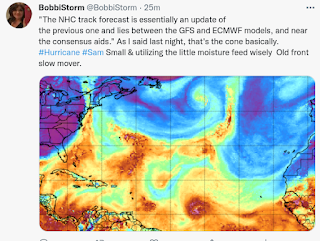 A nice view of the cone from Hurricane City. 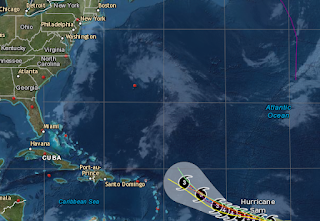 A few things not to forget. There are several areas being watched in the Atlantic, a wave behind Sam could become Teresa unless one of the closer in remnants of previous storms mingled with other moisture become surprise pop ups. No real surprises today and unless you live in the Virgin Islands it’s a long, long ways away. Bermuda may end up watching this very closely. Time will tell.

I have an appointment this morning so I’ll update this after with any relevant model information or intensity changes.

Cooler weather in the Carolinas today and I’m loving it. Blue skies and cool enough to take my new hoodie to a friends house as the walk back should be in the low 60s. It’s cute I need a good excuse to try it out. Stay safe, stay prepared and remember as we move into October soon enough it’s the area we really need to watch.  While 2020 may have seemed the longest year in recent history, 2021 has zoomed along faster than a speeding train.

Ps Dedicated to Bermuda wondering which way Sam goes… not to say everyone in the Florida Keys are watching quietly, because when there’s a hurricane out there you remember it while enjoying life.

The MIMIC really tells the story today. Dry air (for the MDR) as SAL is still a factor. Sam moving a bit faster than expected, though NHC slowed the speed forecast down a tad and now it’s cruising along. Hope you watched the MIMIC really as it tells the story. The NHC discussion basically says the cone is between the EURO on the right and the GFS on the left, as I said yesterday. Not much has changed other than the NHC crowning him with the Hurricane title. Still expected to be a Major Hurricane.