Oh dear, I pop off for 11 days and Mother Nature decided to have a field day! Although I see I missed a few stormlets in the last 1.5 weeks, a couple of them would not have been worth mentioning anyway. A quick recap:

Julian – a Tropical Storm that lasted 28 hours and remained in the Atlantic.

Nicholas – a proper storm which skirted the Texas coast and made landfall as a very weak cat 1 Hurricane last Monday (13 Sept).

Odette – a Tropical Storm that lasted for 24 hours and remained in the Atlantic.

In ye olde days, we may never have even seen Julian or Odette as they were so titchy, shortlived, and in out there in the Atlantic.

We now have two more very small storms lurking out there… Peter and Rose.

Peter was named this morning. He is currently at 18.6N, 58.5W, heading WNW at 14mph and will easily clear the leeward islands tomorrow and won’t cause too much fuss: 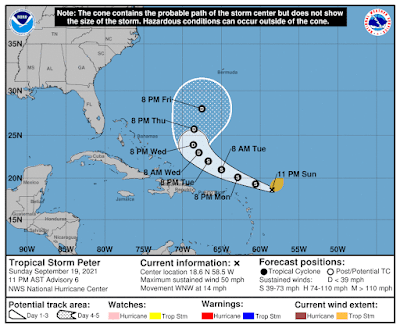 He is currently a relatively weak Tropical Storm with winds of 50mph, central pressure of 1004 mb and is forecast to weaken by Wednesday. There is circulation in the lower half of the troposphere, but wind shear is pretty strong so it doesn’t look likely that he will intensify too much. There is some strong convection in the system, but that is because he is over warm water:

I’ll keep an eye on Peter, but unless he makes a run for it and does something silly, I will not mention him again.

Tropical Storm Rose is going to remain east of Peter and is currently at 15.3N, 31.1W, heading NW at 16mph: 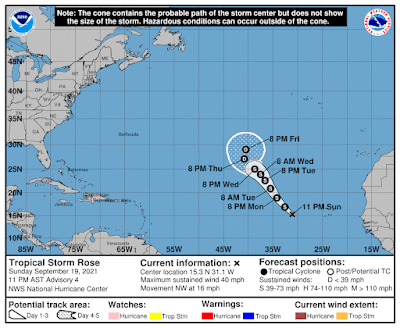 This means she will stay out in the Atlantic and not be too much bother to anyone either. She was named this morning and although she has some convection (which we can see in the satellite imagery above), she is barely a Tropical Storm with winds of 40mph, estimated central pressure 1005mb. She is currently in an area of low wind shear so she could intensify a little, but there is some dry air to her west and north so that will hold her in check a little.

I’ll keep an eye on Rose as well, but as she doesn’t look like she’s going towards any land I may not mention her again either.

I’ll be back when Sam (the next one in line) is around.