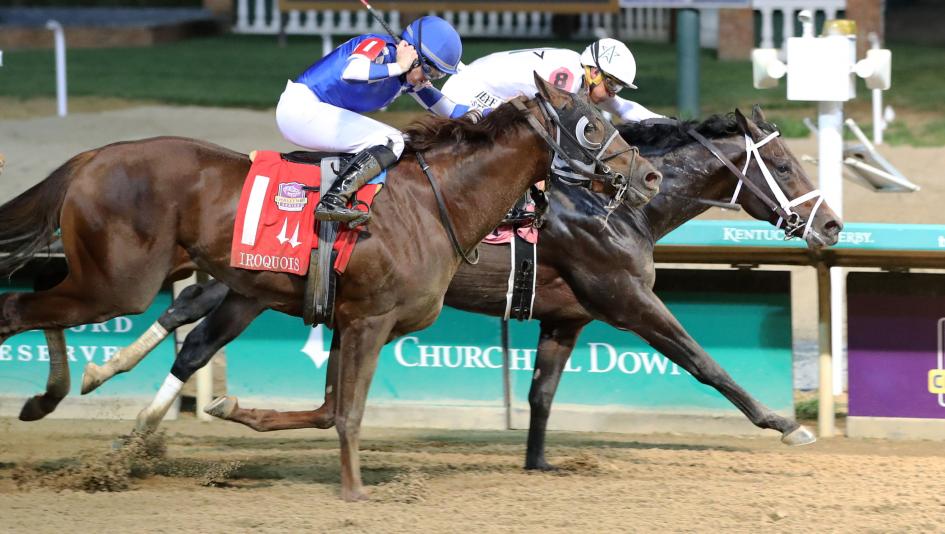 Major General battled for a close victory in the $300,000 Grade 3 Iroquois Stakes while Hidden Connection powered away in the $299,700 Grade 3 Pocahontas Stakes in front of a crowd of 20,204 Sept. 18 at Churchill Downs.

The races are also part of the Breeders’ Cup Challenge Series, with the winners securing berths to the Future Stars Friday card Nov. 5 at Del Mar.

WinStar Farm and Siena Farm‘s Major General has finished with two close calls in his racing career so far, but has come out on top both times. In the Iroquois, the Constitution colt also survived a rider’s objection to take home the victory.

On debut Aug. 21 at Saratoga Race Course, he led at every point of call to win by a neck when racing 6 1/2 furlongs. There he lugged inward in upper stretch, then moved out under left-handed pressure before bumping with runner-up Bourbon Heist.

Javier Castellano, who rode Bourbon Heist in the Spa maiden, took over the mount on Major General for trainer Todd Pletcher in the 1 1/16-mile Iroquois, which Bourbon Heist also came back in.

“You’re always confident whenever Todd puts you on a horse,” Castellano said. “His team does a great job and this horse is just learning. He seemed to enjoy going two turns and when the other horses got to him in the stretch he started to rebreak.”

This time Major General bobbled at the start and the dark bay or brown colt was mid-pack early in the 10-horse field. Roger McQueen and Magnolia Midnight battled up front through fractions of :23.82 and :47.89 for a half-mile. Even-money favorite Stellar Tap raced in third behind them before the pacesetters faded, then led three-quarters in 1:12.83 with a head advantage over Major General, who had been urged on from the four path.

Stellar Tap and Major General battled closely, bumping down the lane, before the former yielded. Major General had enough left to hold off closing rivals by a neck. The 9-2 second choice, he returned $11.80 on a $2 win ticket.

Tough to Tame, who had raced fourth, was second by three-quarters of a length over a rallying Red Knobs. Bourbon Heist came from last to finish fourth.

Stellar Tap was fifth under Ricardo Santana Jr., who lodged an objection against the winner. The stewards ruled no change.

“I was a little surprised Ricardo claimed foul (on Major General),” Castellano said. “Going past the three-sixteenths pole his horse’s head sort of came into mine when he was switching leads and I don’t think it affected the outcome of the race. After that, my horse was looking around a little bit when he got to the lead. This was his first time under the lights and with a crowd like this.”

Major General was bred in Kentucky by Circular Road Breeders and is the first foal out of the Uncle Mo mare No Mo Lemons. The mare has since produced a yearling Always Dreaming colt and was bred to Kantharos for 2022.

Maverick Racing, the buying arm of WinStar, went to $420,000 to secure Major General from the Woods Edge Farm consignment at the 2020 Keeneland September Yearling Sale. The colt was previously bought for $265,000 by Northface Bloodstock when consigned by Paramount Sales to the 2020 Keeneland January Horses of All Ages Sale.

He is now 2-for-2 with $232,525 in earnings and earned a berth in the Grade 1 TVG Breeders’ Cup Juvenile Presented by Thoroughbred Aftercare Alliance.

Hidden Brook Farm and Black Type Thoroughbreds‘ Hidden Connection was bet down to the 9-5 favorite in the Pocahontas off a 7 1/2-length debut win Aug. 17 at Colonial Downs. She dazzled in that last race going 5 1/2 furlongs and showed no problem tackling the 1 1/16 miles of Saturday’s test.

Drawing off by 9 1/4 lengths under the lights at Churchill Downs, Hidden Connection became the first stakes winner for Lane’s End freshman sire Connect.

Jockey Reylu Gutierrez was back aboard the dark bay or brown filly from her maiden voyage and he collected his first victory at Churchill Downs.

“It is incredibly special to get my first win at Churchill Downs for these great people, in front of this amazing crowd, and aboard this filly. She’s unbelievable,” Gutierrez said. “Yesterday, Florent Geroux was talking to me in the jocks room about how to ride this track. He said sometimes in the turns you want to wait a little longer than usual. So, I waited as long as I could in the turn and she just drew away. That was unbelievable.

“She was the first horse I worked this meet at Churchill Downs. Now, I’ll be right back at that barn tomorrow morning at 5:30 for more workers.”

Hidden Connection stalked in second two wide as Lemieux posted fractions of :24.26 and :48.62 through the first half-mile. She took over by a half-length to post three-quarters in 1:13.27, then poured it on down the stretch for her wide margin of victory. She paid $5.60 to win.

Mama Rina rallied from eighth in the 10-horse field to finish second, a neck ahead of Goddess of Fire, who also came from far back. Code for Success, who was last early, finished fourth.

Now if all continues to go well, Hidden Connection could find herself pointed to the Grade 1 Breeders’ Cup Juvenile Fillies.

“If she comes out of things OK, you’d have to think she’s on to the Breeders’ Cup,” Calhoun said.

Hidden Connection was bred in Kentucky by St. Simon Place. She is the second foal and second winner out of the Awesome Again mare C J’s Gal, who has since produced a weanling Palace Malice filly. The mare was bred to Frosted for 2022.

Hidden Brook, agent, purchased Hidden Connection for $85,000 from Coastal Equine’s consignment at the Ocala Breeders’ Sales June Sale of 2-Year-Olds and Horses of Racing Age. That sale was the filly’s fourth time through the auction ring, and second that she sold. She was a $40,000 buy for Mike Pender at the 2020 Keeneland September Yearling Sale when consigned by Machmer Hall Sales.