The first photos of l’Arc de Triomphe Wrapped installation by late artists Christo and Jeanne-Claude have been revealed days before its official opening in Paris.

The 49.5-metre-tall Arc de Triomphe monument has been covered by 25,000 square metres of silvery fabric, secured by 3,000 metres of contrasting red rope.

It fulfils the “life-long dream” of partners Christo and Jeanne-Claude, who were best known for wrapping famous buildings around the world, following Christo’s death in 2020.

The final details are now being added to l’Arc de Triomphe Wrapped ahead of its official opening on 18 September 2021. The fabric coverings will remain in place for 16 days.

“Early on 18 September, once we have finished adding all the ropes and the final details, the fences will be removed to allow the public to come, see and touch the artwork for free,” Yavachev explained. “Making their art accessible to everyone was always essential to Christo and Jeanne-Claude.”

L’Arc de Triomphe Wrapped was first imagined by the pair in 1961, but Christo only began actively developing the project in 2017.

He had described the project as “a living object which will move in the wind and reflect the light” that “people will want to touch”.

Both the fabric and ropes are made from polypropylene, a type of thermoplastic, and are recyclable.

Once the installation is complete, the large Place Charles de Gaulle road junction surrounding the monument is set to be temporarily pedestrianised. 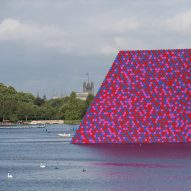 Over 1,000 people have worked on the project, guided by Christo’s team along with Centre des Monuments Nationaux, Centre Pompidou and the City of Paris.

According to the team, it has been entirely funded through the sale of original works of art by Christo and Jeanne-Claude, including collages and models.

Self-funding artwork and retaining complete artistic freedom in this way was central to the mission of the art duo.

“I won’t give a millimetre of my freedom [away] and damage my art,” Christo told Dezeen in 2018.

The Arc de Triomphe’s eternal flame at the Tomb of the Unknown Soldier will continue to burn throughout the installation.

Its interiors and terrace will also remain open, with ticketed tours updated to include details on the installation and past projects by the duo.

Christo’s final realised project before his death was The London Mastaba – a giant stack of brightly coloured barrels placed on the Serpentine Lake in London.

At the time, the artist told his life story and shed light on some of his best-known artworks in an exclusive two-part video filmed by Dezeen.

Other famous installations by the duo include Valley Curtain, a partition of orange fabric hung between two mountains in Colorado, and Surrounded Islands in Florida, where they used luminous pink fabric to encircle a series of islands in Biscayne Bay.

The Arc de Triomphe is also due another makeover as part of a wider masterplan to convert the iconic Champs-Élysées avenue into a pedestrian-friendly public space.

As part of the overhaul, pockets of greenery will be introduced all around the monument and along the 1.9-kilometre-long road in an effort to improve air quality.

The photography is by Wolfgang Volz, unless stated otherwise.