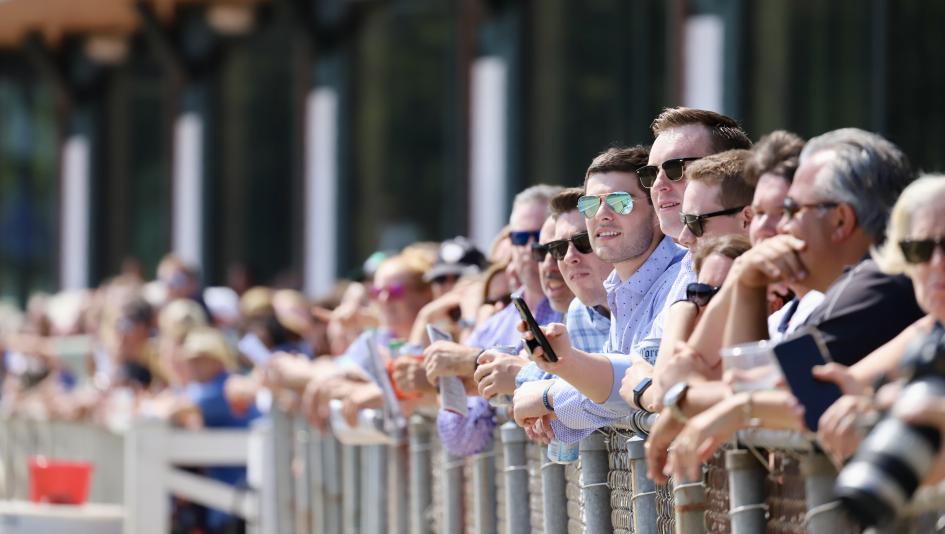 America’s Best Racing contributor Tom Pedulla presents his top 10 memories from the summer meet at Saratoga Race Course, one that took on added meaning with a return to full capacity following the eerie silence forced by the COVID-19 pandemic in 2020:

HOT, HOT, HOT: Many trainers have put together strong meets at Saratoga, but no one has ever accomplished as much as Hall of Famer Steve Asmussen did during the 40-day stand. On Aug. 7, Asmussen surpassed Dale Baird as the winningest trainer in North American history when first-time starter Stellar Tap captured the fifth race for win 9,446 of his career. Incredibly, it got better after that. He closed the 40-day stand with five Grade 1 scores, including one on each of the last three days of the meet. “It’s been a dream meet. It really was,” Asmussen said. “With achieving the record here. With the fans coming back. With how it felt. At Saratoga, not only do you have fans, you have educated fans.” And they showed their appreciation for Asmussen’s accomplishments at every opportunity.

UNSTOPPABLE SAEZ: Luis Saez had never won a riding title at a New York Racing Association track. He has now. Saez, 29, topped the standings at Saratoga, the most challenging meet of all, when he closed the 40-day stand with 64 victories, eight more than Irad Ortiz, Jr. Saez gave much of the credit to former trainer Kiaran McLaughlin, who has helped take him to another level as his agent. “This is a tough spot, so winning this title is everything,” Saez said. Chad Brown, a native of nearby Mechanicville, N.Y., topped the trainer standings for the fourth time with 41 wins while Klaravich Stables, one of his major clients, repeated as leading owner with 21 wins. “After a year with nobody here, you do gain a greater appreciation of having the freedom to come to the track and interact with people,” Brown said.

ROARING RETURN: Fans showed how much they missed the opportunity to watch and wager at Saratoga in 2020 by smashing the record for all-sources handle with $815,508,063 wagered. That represented a 15.6 percent jump from the previous mark of $705,343,949, set in 2019. Paid attendance totaled 1,046,478 for a robust average daily mark of 26,162. “This has been a summer reunion like never before, and we’re especially pleased that the return of fans has translated into strong business for downtown Saratoga Springs and the entire Capital Region community,” said David O’Rourke, president of the New York Racing Association. “The summer meet at Saratoga is as strong as at any point in its storied history.”

GO, GO, GO: There was never a doubt about whether Knicks Go would go to the front in the $1 million Whitney Stakes. The issue was whether he would stay there. Despite strong early fractions, he maintained control throughout and completed the prestigious mile-and-an-eighth contest in 1:47.70 under Joel Rosario’s powerful hand ride. The performance was so impressive that trainer Brad Cox, when asked if Knicks Go ranks as the best horse in the country, responded, “I think right now he is. I think he ran against the best horses assembled to this point at two turns and he performed extremely well.” Voters in the National Thoroughbred Racing Association poll that followed the Whitney agreed, elevating the burner to the top spot.

TEST OF TIME: Two-year-old champions are not always able to stand the test of time. But Essential Quality has done it. He became the first TVG Breeders’ Cup Juvenile Presented by Thoroughbred Aftercare Alliance winner to go on to capture the Runhappy Travers Stakes since Street Sense in 2007 when he outfought Midnight Bourbon by a neck in the $1.25 million race. The Godolphin homebred became the 29th horse to complete the Belmont Stakes Presented by NYRA Bets-Travers double. When Brad Cox was asked what all of that meant, he responded, “He’s a true champion, that’s what it says.” In winning for the eighth time in nine starts and hiking his earnings beyond $4.2 million, Essential Quality again displayed his fighting spirit with another taut decision. Saez, the winning jockey, said of the neck margin, “He gets past the horse and he can stay there. He don’t waste energy.”

RACING IMMORTALITY: Todd Pletcher, who owns a record seven Eclipse Awards as leading trainer in North America, and American Pharoah, who emerged as the first Triple Crown winner in 37 years in 2015, led the 2021 class inducted into the National Museum of Racing’s Hall of Fame. Pletcher credited lessons learned during his six years as an assistant to legendary D. Wayne Lukas. Foremost among those was that “everything matters. Every horse matters. Every owner matters.” Trainer Mark Casse led the 2020 class, whose formal induction was delayed by the pandemic. “As a kid, I read the Racing Form. I wasn’t interested in comic strips. I always knew I wanted to be a horse trainer,” Casse told a large crowd at the Fasig-Tipton Sales Pavilion.

MAGNIFICENT MALATHAAT: Shadwell Stable’s Malathaat rebounded from the lone defeat of her career with a convincing 1 ½-length victory against hard-charging Clairiere in the $600,000 Alabama Stakes. Four weeks prior, Malathaat was heavily pressured early on in the Coaching Club American Oaks and ended up losing by a head, but in the Alabama jockey John Velazquez was able to provide his mount with a comfortable stalking trip. Her immense class took charge after that. “I feel she’s as good as we’ve ever had and she stepped up and redeemed herself the way you’d expect her to,” said trainer Todd Pletcher, a huge statement considering that he oversaw 2007 Belmont Stakes winner Rags to Riches. Malathaat covered the mile and a quarter in 2:02.59.

SPEECHLESS: Nicholas Tateo, a loyal follower of America’s Best Racing, texted “Speechless after the Forego.” He was referring to a bizarre stretch duel between Yaupon and Firenze Fire in the Aug. 28 Forego Stakes that drew national attention. The outcome was decided when an exasperated Firenze Fire reached to his inside and attempted to bite his rival in deep stretch, costing him and jockey Jose Ortiz precious momentum. “Jose told me that if he had just done that in one little instance, he could have corrected him,” said Kelly Breen, who trains Firenze Fire. “But he was strong and he couldn’t get him off the other horse.” Ricardo Santana, Jr., aboard Yaupon, reacted like the pro he is. “That never happened to me before and the only thing I can think is ‘Don’t stop riding,’ “ Santana said. Yaupon kept a straight course and was rewarded with a head victory.

RIGHT MOVE: When majority owner George Hall decided to assign Max Player to Asmussen before last September’s rescheduled Kentucky Derby Presented by Woodford Reserve, there was reason to question what must have been a difficult decision. The Honor Code colt had not run badly, winning the Withers Stakes before third-place efforts in the Belmont Stakes and Travers. Still, Hall thought there was untapped ability, and there is no questioning him now. Max Player has responded to Asmussen’s regimen by recording victories in the July 3 Suburban Stakes and then the Jockey Club Gold Cup on Saratoga’s closing Sept. 4 Saturday. He ran off with the latter by four lengths to secure a fees-paid berth in the $6 million Longines Breeders’ Cup Classic on Nov. 6 at Del Mar. “This is who he is,” Asmussen said of Max Player’s emergence as one of the nation’s finest older horses.

STILL GOT IT: Just when it appeared as if Got Stormy’s best days might be behind her, she turned back the clock and bested males in the one-mile Fourstardave Handicap, just as she did in 2019. The 6-year-old daughter of 2010 Fourstardave winner Get Stormy returned $27 for a $2 win wager, a reflection of her recent struggles. She certainly woke up at Saratoga, providing trainer Mark Casse and jockey Tyler Gaffalione a 1 ½-length decision in 1:33.09. “You could see how she was training. She loves it here,” Casse said. He looks forward to taking advantage of the automatic berth that Got Stormy earned in the FanDuel Breeders’ Cup Mile Presented by PDJF on Nov. 6 at Del Mar. “They’ll have some sharp turns at Del Mar, so that’ll work out just fine,” Casse said.