The UAE pavilion, which investigates using salt as an alternative to Portland cement, was named the winner of the Golden Lion today.

Named Wetland, the pavilion won the award for its focus on the construction possibilities of waste materials.

“[It] encourages us to think about the relationship between waste and production at both the local and global scales, and opens to new construction possibilities between craft and high technology,” said the judges.

Alongside the UAE’s Wetland pavilion, the contributions from Russia and the Philipines were awarded special mentions.

German studio Raumlaborberlin also received a Golden Lion for its installation Instances of Urban Practice, which was deemed to be the best contribution to the biennale’s main exhibition.

Curated by Hashim Sarkis, the exhibition was based on the theme How will we live together? 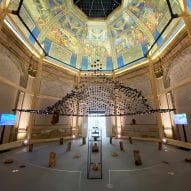 The Silver Lion for “a promising young participant” was awarded to Amsterdam-based Foundation for Achieving Seamless Territory (FAST) for its Watermelons, Sardines, Crabs, Sands, and Sediments: Border Ecologies and the Gaza Strip installation.

A special mention was given to Cave_bureau’s The Anthropocene Museum: Exhibit 3.0 Obsidian Rain installation.

The awards were chosen by a jury including architects Kazuyo Sejima, Sandra Barclay, Lamia Joreige, Lesley Lokko and Luca Molinari.