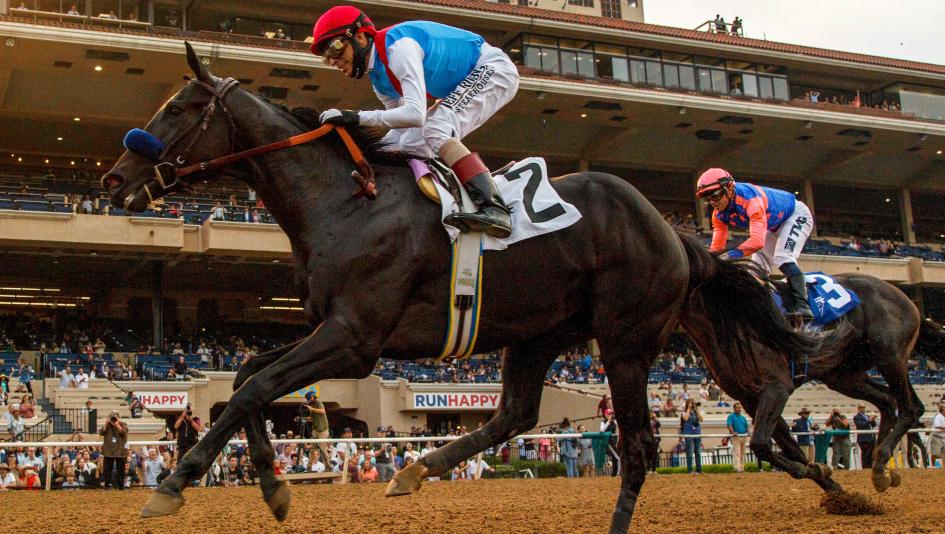 Zedan Racing Stables‘ Medina Spirit made his first race appearance in over three months a winning one as he cruised to a front-running 1 ¼-length victory in the $100,500 Shared Belief Stakes Aug. 29 at Del Mar.

It was the Protonico colt’s first race since finishing third in the May 15 Preakness Stakes at Pimlico Race Course.

“It’s a relief. A Shared Belief relief,” said winning trainer Bob Baffert. “It’s good that the fans were here for the showdown. I did not have any intention of running him in this race until a couple weeks ago. I started thinking about it, figuring it couldn’t come up that tough. Then (son) Bode said, ‘You know Rock Your World’s running there?'”

Both horses raced in the May 1 Kentucky Derby Presented by Woodford Reserve at Churchill Downs. While Medina Spirit, who was second in the Santa Anita Derby, wired the opening leg of the Triple Crown, Rock Your World was off a step slow and jostled between horses soon after jockey Joel Rosario lost his left iron.

Rock Your World finished 17th in the Derby after racing mid-pack. He returned in the June 5 Belmont Stakes Presented by NYRA Bets at Belmont Park to finish sixth after pressing the pace.

Medina Spirit faces the possibility of disqualification from his Derby win by Kentucky stewards after an initial and split-sample test indicated the prohibited race-day presence of betamethasone, a corticosteroid. Kentucky stewards have yet to conduct a hearing pending receipt of follow-up testing.

Counsel for Medina Spirit argues that the test results are from treatment the horse received with the ointment Otomax, which contains betamethasone, and were not caused by injection.

Jockey John Velazquez flew in from the East Coast to retain the mount on Medina Spirit in the Shared Belief. A day earlier, Velazquez guided Michael Lund Petersen‘s champion female sprinter Gamine to victory in the Ketel One Ballerina Handicap at Saratoga Race Course for Baffert.

Medina Spirit, favored at 9-10 odds, was sent to the early lead and withstood pressure from Rock Your World through the backstretch and the far turn. He was kept to task and maintained his advantage in the late stages, completing the one-mile distance in 1:37.29 on a fast track.

“It went the way we wanted it. Once I made the lead into the first turn, I felt better,” Velazquez said after the Shared Belief. “He was moving well. When he got on the backside, his ears went up and he was really cruising. When a horse would come to him, he’d pick it up on his own. When we got to the quarter pole, I said ‘Let’s go; time to pick it up.’ And he was right into it. He finished strong and the gallop out was strong, too. He can build off this race.”

“For what this horse has gone through he’s such a game horse and I wanted to run him here and see if he likes Del Mar,” Baffert said. “I’ve never had a Derby winner come back and win here so that’s a first. He looks good and John said he feels better than ever. There’s still some good racing for him out there. We’re waiting for the process to happen.”

Prior to the Shared Belief, Baffert indicated that the Sept. 25 Pennsylvania Derby at Parx Racing could be a possible race for Medina Spirit.

Rock Your World was second by 2 ¼ lengths over Stilleto Boy in third.

“He ran well. He ran a huge race,” jockey Umberto Rispoli said of Rock Your World, who is trained by John Sadler for Hronis Racing and Talla Racing. “He got beat by the winner of the Kentucky Derby. What are you going to do? I can’t ask anything more of my horse.”

Molecular Hydrogen — Is It the Best Antioxidant You Can Take?

Which Horse Will Finish First in the Fifth Season Stakes?

Where to Watch/Listen: Horse Racing Coverage for Jan. 13-17

How to Apply a Poker Bankroll Strategy on Horse Racing