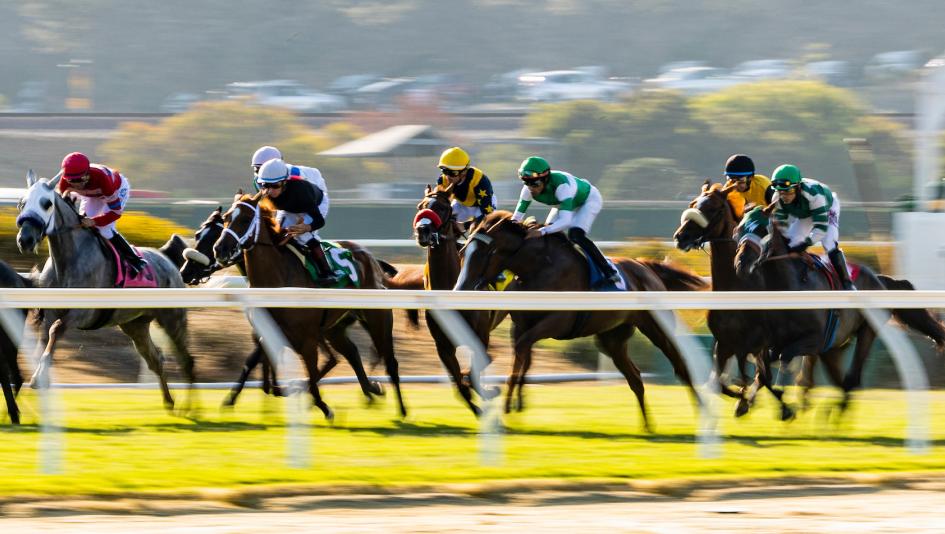 Justin Mustari of Des Plaines, Ill., topped a field of 563 entries to win the $725,000 first-place prize and an Eclipse Award as Horseplayer of the Year at this weekend’s 22nd annual National Horseplayers Championship (NHC) presented by Racetrack Television Network, Caesars Entertainment and Bally’s Las Vegas. The event was postponed from its usual early February dates due to the COVID-19 pandemic and became a midsummer event for the first time.

The 26-year-old Mustari, who works for his father Frank’s insulation contracting company, is the youngest NHC winner. He amassed a winning score of $370.80 over the three-day tournament from 52 mythical $2 Win and Place bets – 17 on Friday, 18 on Saturday, 10 in Sunday morning’s Semifinal round, and seven at the climactic DraftKings Final Table for the overall top 10.

“I had to give myself a chance to win with this kind of money,” Mustari said. “I definitely didn’t like this horse as a top pick but I had to find something in the range that could get me there. I thought this horse coming off the layoff potentially had a chance if he ran back to some earlier numbers, and he did.”

Mustari was the NHC two-day leader at the end of Saturday but lost the lead during the morning’s Semifinals round that led to the Final Table. He did not cash in any of the first six mandatory Final Table races.

“I’ve got to buy a house because I still live with my parents,” he said. “My dad has been the reason I play this game and he taught me everything I know so I have to give a lot of credit to him.”

Arias finished second with $347.20. The Bell Gardens, Calif., resident was seeking to become the event’s first two-time winner. However, when the second mandatory race went off, Arias was nowhere to be found. His pick did not appear on the selection screens and it soon became apparent that he had failed to get his selection in before the gates opened. Later, Arias told reporters he had had a personal issue to tend to but would not have landed on the winner of that race anyway. The $200,000 second-place prize pushed Arias’s all-time NHC earnings to $956,000, behind only the all-time leader, Michael Beychok ($1,015,300).

The official Top 10, with final bankroll (and prize):

By virtue of his victory, Mustari also earns an exemption into next year’s NHC finals and a berth to the 2021 Breeders’ Cup Betting Challenge worth $10,000.

The full NHC and Consolation Tournament standings can be accessed at ntra.com.

The NHC was held for the second straight year in the historic Bally’s Event Center, which for three days was transformed into the world’s largest race book. The next NHC is set for Jan. 28-30, 2022, at Bally’s Las Vegas.

The NHC finals awarded cash prizes to 56 players – the top 10 percent of finishers – from a total purse of $2,154,000. An additional $50,000 went to the top 20 in today’s Consolation Tournament. Including $367,500 paid out to top finishers in the year-long NHC Tour, NHC Tour travel awards, RTN subscriptions, and the $10,000 Charity Challenge tournament prize, plus $30,000 worth of Breeders’ Cup Betting Challenge prizes in the form of entry fees, bankrolls, airfare and hotel, the aggregate value of payouts this weekend in NHC cash and prizes totaled $3,423,552.

To make the Semifinals cut, the 456 NHC entrants were required to place 35 mythical $2 Win and Place wagers –17 on Friday (one less than scheduled due to a weather cancellation) and 18 on Saturday.

DraftKings Final Table participants were relocated to a single table in the middle of the Bally’s Event Center that served as NHC headquarters.

Goodall, a record-tying 19-time NHC qualifier, was inducted in the NHC Hall of Fame at Sunday night’s Champions’ Dinner, as was Ray Arsenault, the 2017 NHC winner and third all-time NHC money-earner.

Defending NHC champion Thomas Goldsmith advanced to the Semifinals round with both of his entries and finished 18th ($246.80) and 25th ($224.20). He was one of only two players with multiple entries in the Semifinal round.

In a separate Consolation Tournament for players that did not reach the Semifinal round, Vincent Achillare of Convent Station, N.J., won the $10,000 top prize with a bankroll of $96.30 from 10 optional races. The Consolation Tournament started with bankrolls reset to zero. Cash prizes totaling $50,000 were awarded, from the $10,000 first prize down to $1,000 for 20th.

The 2021 NHC was the culmination of 256 qualifying contests held online and at racetracks and OTBs in 2020. From those contests, there were 35,730 entries played in hopes of making it to Bally’s Las Vegas.