Grace has been behaving as expected – she made landfall in the Yucatan today (Thurs) at 4.50am local time as a cat 1 storm with 80mph winds about 10 miles south of Tulum, Mexico, and weakened to a Tropical Storm before emerging into the Bay of Campeche. She’s now over warm water at 20.8N, 91.8W, heading W at 16mph and will make landfall in Mexico tomorrow night as a hurricane again: 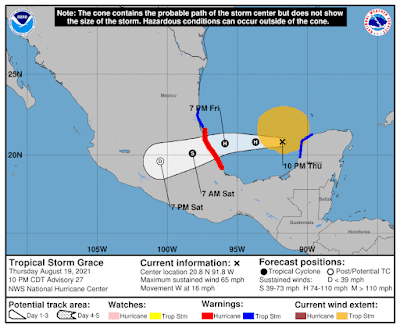 She’s currently a mid-to-strong Tropical Storm with winds of 65mph, central pressure of 994mb (TS range: 39-74mph). Convection is pretty weak because of that dry air I mentioned yesterday:

But the convection is slowly increasing because the water is a warm 29 deg C, with the upper 50-75m warmer than 26 deg C. She will most likely be a weak-to-mid size cat 1 when she makes landfall – maybe 80mph winds again.

Henri is currently at 29.8N, 72.3W and it looks like he may have started to make that northward turn (although we will know for certain tomorrow) – he is now heading WNW at 8mph: 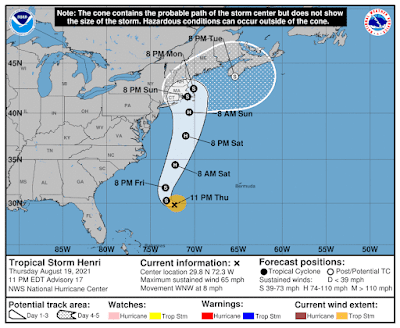 They are forecasting landfall in the New England area, but keep an eye on the entire Cone of Uncertainty because he can go anywhere in there, including remaining offshore (probably best not to go out in a boat to investigate though!). The reason for this move to the north is because high pressure is building in the Atlantic to his east, and there is a low front coming in from the west – storms in the northern hemisphere go clockwise around high pressures and counter-clockwise around low pressures, so although his forward motion is just 8mph at the moment (slow), this will make him speed up for a portion of that forecast.

He is still officially a mid-to-strong Tropical Storm with winds of 65mph, central pressure of 997mb. His convection has really picked up since yesterday – a lot of thunderstorm and tornadoes. There is some wind shear, which we can see in the clouds that are being pushed to the south/southwest:

But the other clue is that his circulation in the lower troposphere doesn’t align with the mid-troposphere and there isn’t anything at all in the upper levels of the troposphere (a sure sign of a hurricane). So, although he looks fierce, I agree with the NHC that he is still a Tropical Storm. The vorticity (circulation) map in the lowest level (850mb):

You can see the red blob that is Henri is to the south of the red blob in the 850mb map? And here’s the vorticity in the upper level (200mb):

You can see there is nothing aloft for Henri, although Grace has something going on at those heights. Once that wind shear subsides, he will be able to get stronger.

There are two things to watch for tomorrow: (1) has he really made that turn to the north or was this WNW movement just a red herring?; and, (2) will the wind shear subside and allow his vertical structure to improve?

A reason to keep an eye on the entire Cone of Uncertainty is shown, yet again, in Linda whose forecast track now takes her potentially over Oahu: 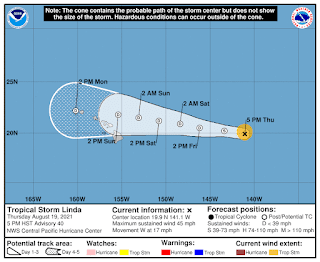 She is currently at 19.9N, 141.1W, heading W at 17mph. However, the good news is that she is a very weak Tropical Storm now with winds of 45mph, central pressure 1006mb. That dry air I mentioned yesterday, along with the cooler waters, really took the oomph out of her:

Can you see Linda? Yes, she’s the almost transparent swirl of clouds due east of the Hawaiian chain. There is virtually no convection there at all! She’s a glass storm… not to be confused with the fascinating glass octopus, also recently seen in the Pacific.

For those of you who are awake by the time you read this, your interest may have been piqued by the remarkable long chain of convective activity that stretches across the Pacific from east to west in the satellite image. Did someone take some colouring pens and try and draw a straight line? Are they signals and should we be trying to decipher the code? Is it even real? Well, I can tell you it is real and it’s all nature at work…

<Science Alert!>It’s the Inter-Tropical Convergence Zone, or ITCZ for the cool kids who know the lingo. It is a band of clouds that are close to the geographical equator but can cross it so sometimes it is north of the equator. This is the region where the northeast and southeast trade winds converge and there is very little wind. Because of this, it is also known as the Doldrums, because in days of yore when sail boats got caught in the ITCZ they didn’t have any wind to push them along and would get stuck there – hence the word ‘doldrums’ in our language as well. The trade winds are essentially permanent features of the atmosphere and they blow from east to west (easterlies) in both the northern and southern hemispheres across the Pacific and Atlantic Oceans. They can get stronger or weaker and move north/south depending on the season, and they can even vary from in strength from year to year. <End Science Alert!>

This may be my last update on Linda as she will be a very light/non-existent storm, if any, as she gets to Hawaii. She may bring some surfing fun though, just in case anyone in Hawaii knows how to surf…. 😉