Tropical Depression Fred is still pretty weak… can’t move a piano, even with friends and nice cups of tea to help…

Back to our Fred, who is not quite as classic but is behaving as forecast by skirting the northern coast of Cuba. He is currently officially at 21.5N. 75.6W, heading WNW at 9mph. He has slowed down since yesterday, but “You see the trouble with Fred is, he’s too hasty, You’ll never get nowhere if you’re too hasty.” 😉 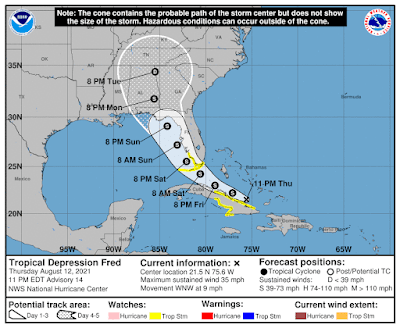 The satellite imagery shows a pretty weak storm – quite disorganized.

But we know that there is some wind shear and so the convection is still to the south and east of the center. To add to the ‘how weak is Fred’ data set, the vorticity is not only skewed which means there is strong wind shear, as I showed you yesterday, but the vorticity (circulation) in the mid-levels of the troposphere is weaker. Here’s the map from the lowest level of the troposphere (850mb):

You see that reddish blob over Cuba? That’s Fred’s vorticity (circulation). And here’s the map from the mid-levels of the troposphere (500mb):

In this case the blob is over Haiti – the two ‘blobs’ don’t overlay and the mid-level blob is bordering on orange/yellow versus orange/red, which means it is weaker.

The track continues to take him along the Cuban coast and then across to Florida – but keep an eye on the cone because he can go anywhere in there. His forecast path, even only 1.5 days from now, covers quite a broad area which means there is a little uncertainty in where he will go. There are a few things at play which makes his track a bit tricky to forecast and they are connected to his intensity. If he passes closer/over land (southern edge of the Cone of Uncertainty), then he will weaken even more and may even dissipate with that wind shear. But if he stays over water (northern edge of that cone), he has time to intensify despite the wind shear, and could get to the Tropical Storm strength that the NHC think he will reach.

I think if he does manage to strengthen as he moves along Cuba and against that wind shear, then it will be very slow – he’ll barely be a Tropical Storm. But tomorrow will really shed light on this because we’ll know if his path is going closer to land and what impact the continued wind shear is (or is not) having.

Before I head off for another cuppa tea, a quick note on the new Atlantic Blobette. She’s at about 14.5N, 44.5W heading W at around 20mph. You can see her vorticity signal in the maps above – both at the lowest level of the troposphere and in the middle level (due east of the Lesser Antilles). The signal is definitely close enough to being Tropical Storm level – and she may already be one actually. You can see her convection really picked up today – she’s better looking than Fred…

If she gets named, this will be Grace.

Odette Forms off the East Coast…. Peter Should Show Up Soon Enough in the Atlantic.