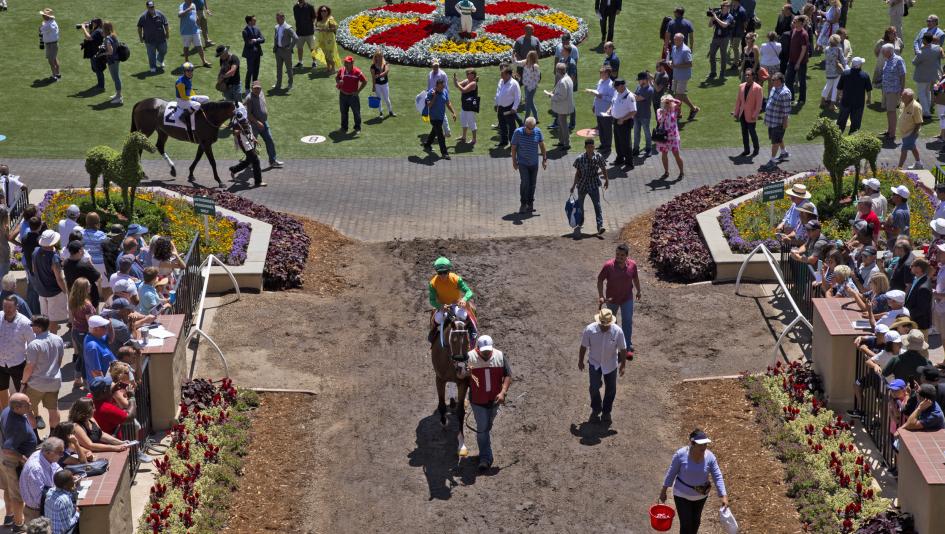 The $300,000, Grade 1 Bing Crosby Stakes is a “Win & You’re In” for the $2 million Breeders’ Cup Sprint this fall and drew a field of nine very good sprinters. Last year’s Bing Crosby Stakes winner, Collusion Illusion, is back to defend his title. Whereas he was sent to post at 9-5 odds one year ago on the strength of three straight wins, including the Grade 3 Lazaro Barrera Stakes, this year Collusion Illusion returns from seven months off and lost his last three starts of 2020.

Instead, favoritism is likely to go to C Z Rocket with career earnings of nearly $1.4 million, much of that earned when second in the Grade 1 Breeders’ Cup Sprint last fall and when winning the Grade 2 Pat O’Brien Stakes at Del Mar last summer. Law Abidin Citizen was third in last year’s Bing Crosby behind Collusion Illusion then four weeks later finished third in the Pat O’Brien behind C Z Rocket. He enters the race off a win in the Oak Tree Sprint Stakes four weeks ago at Pleasanton. Vertical Threat is another with strong stakes credentials, last seen winning the Steel Valley Sprint Stakes in November and having also won the Smiling Tiger Stakes at Del Mar last summer. Quick Tempo returned from nearly seven months off four weeks ago for a strong, second-place effort in the Iowa Sprint Stakes, while Brickyard Ride easily won the Grade 2 San Carlos Stakes in March and enters the race off a win in the Thor’s Echo Stakes. Shooters Shoot is yet another with good credentials in similar sprint stakes as he was second in the Grade 2 Triple Bend Stakes when last seen at the end of May. Eight Rings finished fourth in that race as the 8-5 favorite and hasn’t run since. Dr. Schivel rounds out the field, and has to be considered a contender as he won the Grade 1 Runhappy Del Mar Futurity last summer and returned from nine months off to win just last month.

Vertical Threat is a perfect 3-for-3 in dirt sprints. Each of those three wins came at the six-furlong distance of the Bing Crosby. One of those wins came at Del Mar last summer when, in only the second start of his career, Vertical Threat won the Smiling Tiger Stakes. That effort earned him a career-best 107 Equibase Speed Figure off a 102 figure one month earlier. After a failed attempt at a longer distance in the Pat Day Mile Presented by LG and E and KU last September, Vertical Threat rested two months and shipped to Ohio for a dominant performance with a field-high 118 speed figure winning the Steel Valley Sprint Stakes in a field of 12. In this year’s Bing Crosby, there is likely to be a contested early pace battle between Quick Tempo and Brickyard Ride, who have only won when leading from the start. Considering Vertical Threat closed from off the pace to win last June then again in July in the Smiling Tiger, the colt could get first run on the tiring leaders and hold off any horses farther back in the early stages. Additionally, he’s very likely to be stronger as a 4-year-old so having put in some superb workouts for his comeback, Vertical Threat has a fine chance to keep his perfect record at the distance intact to win.

C Z Rocket has won 11 of 26 career races, including four of eight at this distance. He also won the only time he ever raced at Del Mar. That win came last year when taking the Pat O’Brien Stakes at seven furlongs in August with a 110 figure. C Z Rocket is even faster at this six-furlong trip, as he earned a 117 figure last September when victorious in the Santa Anita Sprint Championship. Not disgraced one bit when second behind Whitmore in the Breeders’ Cup Sprint last fall, C Z Rocket won his first two starts of 2021, first with a 111 figure in the Hot Springs Stakes then a 114 in the Count Fleet Sprint Handicap. Stretching out to a mile and running on a sloppy track, C Z Rocket was second in the Steve Sexton Mile in May and, on the cut back to his best distance, has every right to rebound to a winning effort.

Dr. Schivel, like Vertical Threat, has only run five times. He improved markedly last summer at Del Mar when easily winning to break his maiden in his third career start (with a 108 figure) before victory in the Del Mar Futurity as the betting favorite. Taking his time to get back to the races, Dr. Schivel returned in June as if he had never been away as he relaxed in fourth in the early stages before getting up by a neck right on the wire. That effort earned him a new career best 109 figure from which he should improve in his second start off the layoff, and as a previous grade 1 stakes winner, Dr. Schivel could certainly run well enough to win.

Lessons on Loving Our Bodies

Shell Goes Full BP – Part Deux – Watts Up With That?

6 questions to ask your oncologist about breast cancer

Beginner’s Bet of the Week: The Place Bet

Making Money Betting Against the Favorite in Cotillion Stakes

Lessons on Loving Our Bodies