Nothing is officially happening in the tropics nor is anything expected to develop according to the National Hurricane Center for the next 5 days. The image above is from Zoom Earth, a fantastic site, and shows the Low off of the Carolinas that’s still dumping rain on Myrtle Beach and a huge wave complex coming off of the Carolinas. Zoom Earth also shows the dry air to the North of it combined with the gauzy view of Saharan Dust that inhibits the large waves coming off of Africa.

I don’t like to totally dismiss these are they can often flare up after they make it past the dust and as they are large there could be something left over in a week or so but officially the models say “No No No!” 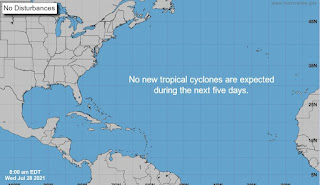 Tropical Meteorology these days is very driven by the models and that is where the “nothing for the next 5 days comes from” but time has taught us not to ignore the tropics but to check back daily and see if anything has officially changed. Basically the NHC is saying “nothing to see here so move along” but what they should be saying under those white basic graphics is “but prepare for the Hurricane Season that will come alive sooner rather than later” because that is the message they should be pushing in the quiet time. Yes, there is a link on Hurricane Prep on their site but I’d prefer a link to that part of their page be more noticeable.

The trip goes on as there are places to go and people to see today …. working my way back to Raleigh. But for how long will I be in Raleigh? In truth I’d love to just stop and breathe and touch base at home for days. But time will tell.

Have a good day and remember to continue preparing for Hurricane Season. There’s no reasoning with people who argue the season is dead with people who scream “La Nina!!” (as if they just saw a shark) and the truth is La Nina or no Nina the season will ramp up fast and furious and I’m not just quoting a movie. The signs are there and the question is not how busy it will be but how many could make landfall and hopefully not as a Major.

Besos BobbiStorm (back on the road)

Sam. Down the Road Watch Out! October Surprise Coming!

Subtropical Storm Teresa Joins Hurricane Sam in the Atlantic Basin. Sam Still Far Away and Much Can Change. Stay Tuned.

Hurricane Sam. Westbound 15 MPH … Can Intensify Fast & Collapse as Fast. Some Dry Air Out There … MDR Unusually Dry in Late...

Why the United States thinks this blowout win at the Ryder...