Road to 2021 Breeders’ Cup: Three Heating Up, Three Cooling Down for July 21 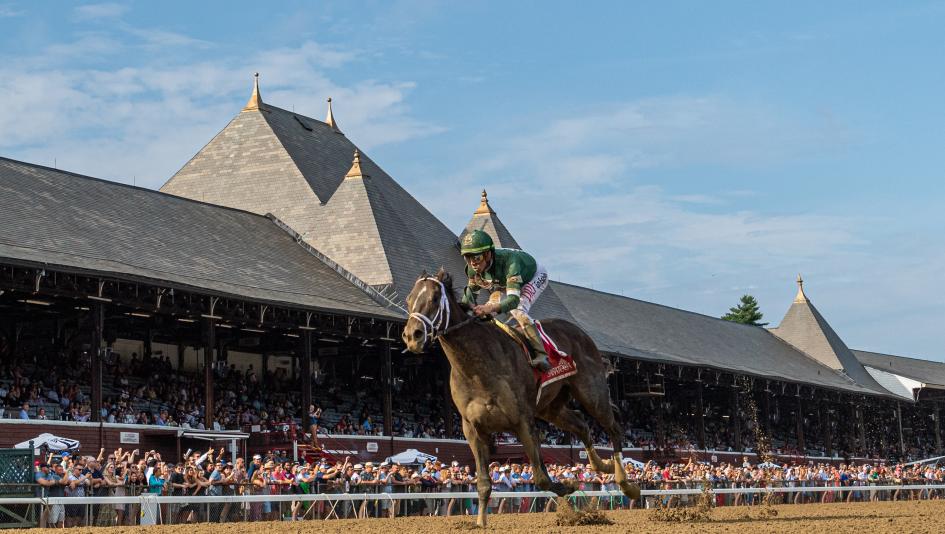 The path to the 2021 Breeders’ Cup World Championships at Del Mar on Nov. 5-6 is a road with plenty of ups and downs as talented racehorses vie for a spot in one of 14 championship races and $31 million in purses and awards.

This selection is as much about what the connections of Santa Barbara said after her visually impressive rally to win the $700,000 Grade 1 Belmont Oaks Invitational Stakes July 10 as her dazzling turn of foot. Legendary Irish trainer Aidan O’Brien is not shy about sending his horses to the U.S. for the Breeders’ Cup World Championships, and his assistant T.J. Comerford confirmed the 3-year-old Camelot filly will be pointed to the Grade 1 Maker’s Mark Filly and Mare Turf Nov. 6 at Del Mar. Group 1-placed in Ireland, Santa Barbara was hemmed in through the stretch and blocked in the Belmont Oaks, but once jockey Ryan Moore guided her to clear running room she closed with ground-devouring strides to win by a half-length. Santa Barbara earned a 112 Equibase Speed Figure, a 90 Beyer Speed Figure, and a 95 Brisnet speed rating for the win, but I think the second two undersell the quality of her victory. Her next start in Europe is yet to be decided, but if she returns as expected for the Filly and Mare Turf, Santa Barbara will be formidable to say the least.

In two starts to date, Wit has been extraordinarily impressive. He won his career debut by six lengths in June at Belmont Park and then dominated 10 opponents as the 11-10 favorite for the $150,000 Grade 3 Sanford Stakes July 17 at Saratoga Race Course. Unlike some precocious 2-year-olds, Wit is not a pure speedball who goes as fast as he can for as long as he can and then hopes to hang on. The dark bay or brown Practical Joke colt has been reserved off the pace in his two starts and responded on cue to take command. He got away to a bit of a troubled beginning in the Sanford but used an eye-catching, sweeping bid on the turn to surge to a commanding lead in early stretch and then rolled to an eight-length romp under Irad Ortiz Jr. For his stakes debut, Wit earned terrific speed figures: 100 Equibase Speed Figure, 90 Beyer Speed Figure, a 96 Brisnet rating. The starting gate has been a minor issue in both of his races, so he has some room to grow for Hall of Fame trainer Todd Pletcher and could perhaps be a little closer to the pace if he can improve in that area before the $300,000 Grade 1 Hopeful Stakes on Sept. 6 at Saratoga. “I thought he broke a little better this time,” Pletcher said. “He’s a very well-behaved horse, very composed and mature mentally. He’s just one that, for whatever reason, is not super quick the first jump or two. It’s not a behavioral issue.”

My third choice here was a tough one to whittle down, but I have to admit I’m more than a little intrigued by Dr Post. He showed flashes of elite ability as a 3-year-old, including a runner-up finish in the 2020 Grade 1 Belmont Stakes Presented by NYRA Bets, but he was well-beaten in that race and subsequently ran third in the Grade 1 TVG.com Haskell Stakes and fourth in the Grade 2 Jim Dandy Stakes as some of the sparkle faded a bit. He returned from an eighth-month layoff with a clear win in the Grade 3 Westchester Stakes in May at Belmont. Following an unplaced finish in the Grade 1 Hill ‘n’ Dale Metropolitan Handicap, the Quality Road colt bounced back with a 1 ¼-length win July 17 at Monmouth Park in the Grade 3 Monmouth Cup Stakes. The 106 and 108 Equibase Speed Figures he earned for the Westchester and Monmouth Cup, respectively, are the two highest of his career. Likewise, he earned solid Beyer Speed Figures of 104 (Westchester) and 101 (Monmouth Cup), and his Brisnet ratings 101 (Westchester) and 102 (Monmouth Cup) paint the picture of an improving older male. I’m not sure he can elevate his game to the point where he’s a major player for the Breeders’ Cup, but Dr Post is an intriguing contender on the right trajectory for trainer Todd Pletcher.

Also-Eligibles: The hardest omission from the top three was Pretty Birdie, who posted her second-straight open-length victory when she led from start to finish in the $150,000 Grade 3 Schuylerville Stakes July 15 at Saratoga. She improved seven points to a 92 Equibase Speed Figure and looks like a nice prospect for the $2 million Grade 1 Breeders’ Cup Juvenile Fillies Nov. 5. … I could have gone all Europeans here and used Santa Barbara’s stablemate Bolshoi Ballet, winner of the Grade 1 Belmont Derby Invitational Stakes July 10; and Althiqa, who shipped over to the U.S. for Charlie Appleby and won the Grade 1 Longines Just a Game Stakes in June and Grade 1 Diana Stakes July 17 at Saratoga. The former would be a major player for the Grade 1 Longines Breeders’ Cup Turf is he ships back to the U.S. in November for Aidan O’Brien; the latter would be tough in the Filly and Mare Turf, but it sounds like no concrete plans have been made for Althiqa for fall. … Souper Sensational looks like a 3-year-old filly headed the right way after winning the $150,000 Grade 3 Victory Ride Stakes July 10 at Belmont Park. I thought she was unlucky in the Grade 2 Eight Belles Stakes presented by Smithfield on the Longines Kentucky Oaks undercard, and I like that she’s back sprinting where I believe she is best. Three-year-old fillies can absolutely compete in the Filly and Mare Sprint having won the last three editions. … Graceful Princess had a breakout performance in winning the Grade 3 Molly Pitcher Stakes July 17 at Monmouth, earning a career-best 110 Equibase Speed Figure. As a 5-year-old by leading sire Tapit out of 2011 Horse of the Year Havre de Grace, she bears watching as a possible late-bloomer. … Good to see 2020 Breeders’ Cup Juvenile Turf Sprint winner Golden Pal return from an eight-month layoff with a three-length score in the Grade 3 Quick Call Stakes July 15 at Saratoga. It was not unexpected — Golden Pal was the 1-5 favorite — but you never know how racehorses will progress from 2 to 3 and he looks like he’s still plenty fast.

Godolphin Racing’s 2021 Dubai World Cup Sponsored by Emirates Airline winner has been sidelined to have surgery to remove a chip from his right knee. He will miss the rest of the 2021 season. Trainer Mike Stidham said the chip was discovered when they took some precautionary X-rays after he finished a disappointing second as the favorite for the July 3 Grade 2 Suburban Stakes. Mystic Guide is expected to make a full recovery, but one of the leading contenders for the Longines Breeders’ Cup Classic is now out of contention for the $6 million race. “It’s too early at this time to make a decision to either continue racing or retire him but we will give him some time to recuperate and we will then make that determination,” Godolphin USA President Jimmy Bell said. Stidham told Daily Racing Form: “This is going to be up to Godolphin whether or not they retire him or we get another year with him. In my eyes, I’m hoping we have him ready make a return to Dubai, that would be a beautiful thing to be able to do that.”

Grade 1 Preakness Stakes winner Rombauer will be freshened for two months after trainer Michael McCarthy told Daily Racing Form that he was not pleased with how he trained following a third-place finish, beaten by 12 ½ lengths, in the Belmont Stakes Presented by NYRA Bets. That would eliminate the 3-year-old Twirling Candy colt from consideration for the Longines Breeders’ Cup Classic, and McCarthy told DRF that he expects to return Rombauer to training later this year with his eyes on a 4-year-old campaign for the Preakness and El Camino Real Derby victor.

The Street Cry gelding won three of five starts in 2020, including the $1 million Grade 1 Pegasus World Cup Turf Invitational Stakes Presented by Runhappy, during his 7-year-old campaign after closing out his 6-year-old season with a fourth-place finish in the 2019 Grade 1 Longines Breeders’ Cup Turf. Sidelined for 10 months during a stretch, which included a minor injury, the now 8-year-old gelding did not fire when a well-beaten fifth July 17 in the Grade 3 Arlington Stakes. While there is little doubt he needed a race after such a long layoff, on class he towered over the opposition in the field. It has to be a bit concerning that his return was so dull — he didn’t pass any horses in the stretch at Arlington and the Equibase Speed Figure (91) was his slowest in 21 starts since April 2018. Perhaps we’ll see an improved Zulu Alpha in his next start with a little more foundation having a race under his belt. Let’s hope so.

Strategy for Weekend Warriors to Lower Your Scores