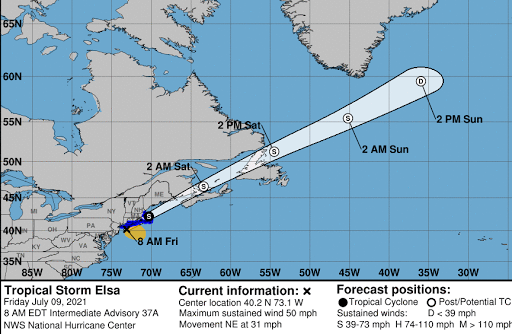 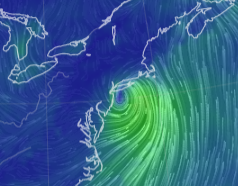 Actually more pulled together than before. 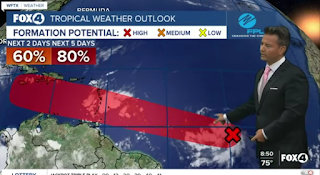 But think Elsa was an overachiever.

I’m wondering if The Weather Channel used up most of their budget covering ELSA. Being silly, been a long week. Talking to my grandkids who are really young and at Wolf Lodge in Georgia because no one else is up there. I remember when their father asked me if Elsa would be a problem for their trip I told him no it’s doing I-95.  So sure were we of this track it was never a concern even when it was in the Caribbean. What’s impressive is that the track was set early on.

I can go back in my blog to when I was watching it OVER Africa as it was a stand out wave that caught everyone’s attention and as Dabuh points out “always take the 2nd wave in a set” and Elsa proved that point. My blog is filled with early information but it also coincided with the Champlain Towers building Collapse and I’m trying to move away from that as my friend has been buried and the building is gone and we are moving on even though I remember the building where I worked in 1997 well.  1997 was a crazy year with no hurricanes yet I spent the whole summer and most of the fall turning hurricane history with new friends on AOL that I still talk to on Twitter. I’ve changed husbands (embarrassingly true and no I met him ten years later  not on AOL) and yet I remember that quiet 1997 Hurricane Season when the El Nino of all El Ninos came on fast and furious.  Sometimes weather surprises us. 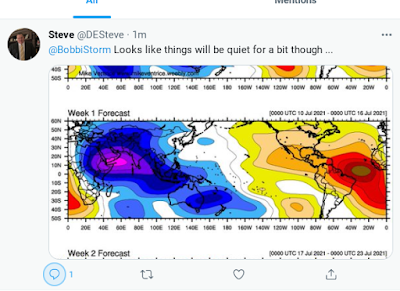 The tropics should be quiet for a bit.

Texas rain has no circulation so just a yellow zero %

There’s also talk in a few weeks it gets very busy.

I’d err on the side of something close in popping up.

I’m going to take it easy today and keep it short.

Have a wonderful weekend.

Elsa left us in time for some summertime fun.

But what a clean up in her wake in some places.

Flooding in NYC that reminded some of Sandy.

Be grateful Sandy was weak not a Cat 3.

Have a good weekend!

Ps… only time itself will tell when we have Fred.