Westbound 30 MPH Elsa a Fast Mover. When Does It Slow Down? Where Does it Make THE TURN? Too Many Questions. Weak Storm or Major Hurricane. More Answers? 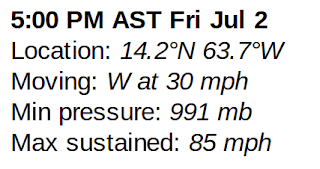 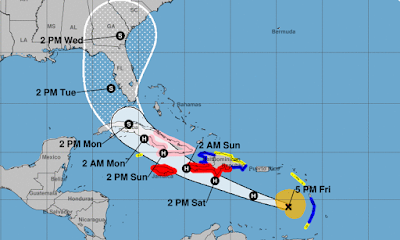 A bit more West at first and then…

…possible (or not) a sharper turn down the road. 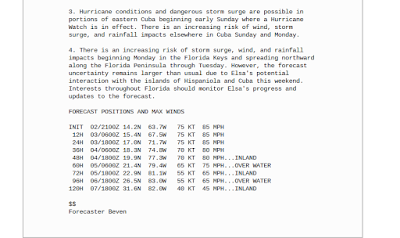 NHC maintains this as a minimal hurricane…

I don’t really agree here. I believe there may be some fluctuation of intensity up or down. It’s extremely rare for a cyclone at this low latitude to travel at 30 MPH forward speed. It’s common at higher latitudes as they race away to meet a front but moving this fast shows it’s being pushed by a strong, low latitude high pressure area and at some point it’s going to get further West than expected by most models. Models do take in history and normal tracks and this is not a normal hurricane. It punched through Saharan Dust and zoomed West towards the Islands becoming a Hurricane as it made landfall in the area of Barbados. In the same way, but different, Florence plowed West early on despite advisory discussion… despite dry air and kept going. Many storms have done this but it’s not the norm. Normally, when a hurricane moves that fast it’s lower center becomes detached from it’s higher center and the column begins to tip a bit; often that fixes itself just when meteorologists expect it do unravel and die. Sometimes hurricanes do fall apart and die or become weak and then further West they come to life again. While patterns exist every storm is different.

In discussion from the NHC this was discussed “the aircraft also reported that the 700-mb circulation remains somewhat disorganized, and the 700-mb center is not vertically aligned with the surface center. The former issue is likely due to the rapid motion, and the latter may be due to the effects of westerly shear.”

The discussion also mentions that the HWRF model does make it a Major Hurricane, however for now that seems to be considered an outlier possibility. The in depth discussion is well written and can be easily understood by even a novice who is interested in meteorology. You also learn more than just looking at the cone. 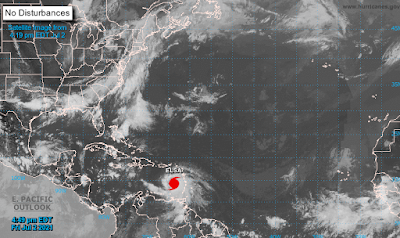 Let’s take this image apart above.

#1 we see Elsa, reaching out her arms… (bands) to the left as if she wants to go West fast and in fact she is moving, cruising 30 MPH (a crazy fast, too fast speed for a cyclone at this latitude) and solidly in the Eastern Caribbean …an area known for strong shear at this time of year.  I would not rule out Jamaica from feeling some impact from Elsa at this point but they often get lucky.

#2  you see the front draped across the US but remember fronts this time of year do not barrel their way into the Caribbean, they dip down… go flat and rain themselves out usually over South Florida. That’s a problem in itself in that it lowers pressures across Florida. Note currently there’s also convection in the Bahamas.

#3 Note the wave train still active behind Elsa as another strong wave comes off.

#4 Lastly where it crosses Cuba makes a difference due to mountains and the water temperatures near Cuba. 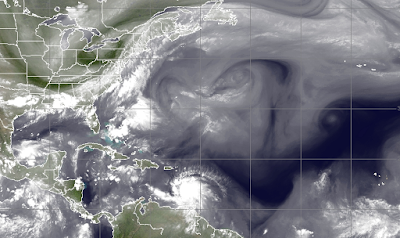 Models shown below are well done.

This shows that all models call for a turn North.

So the question becomes …where and when does it turn.

And how strong is Elsa when it does turn.

And……..there are a lot of questions to answer.

We will know more Saturday Night.

It will turn but where? When?

From Jamaica to Florida including Cuba and the Bahamas … all could get some of Elsa. But the real remaining question is…………will the forward speed of Elsa hurt it or will it slow down soon enough when the High behind it slows down as at some point the High Pressure Ridge weakens…….. 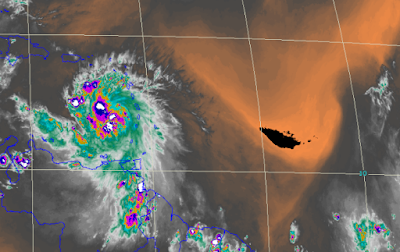 The oranges are high pressure, you can see the high pressure digging in behind Elsa shoving it West fast in the linked loop but at some point that always stops. Where is the question? When it stops… when Elsa reaches the end of that high it will turn North in latitude, WNW … NW … could it stall or suddenly slow down before the turn that does happen and it throws off the time line. Stay tuned.

As for an analog storm or example… Hurricane Charley did a similar track but was only a major before landfall, after rapid intensification. August 9th, not July so it’s not the best analog but few July hurricanes travel through the East Caribbean…usually considered the graveyard of hurricanes. 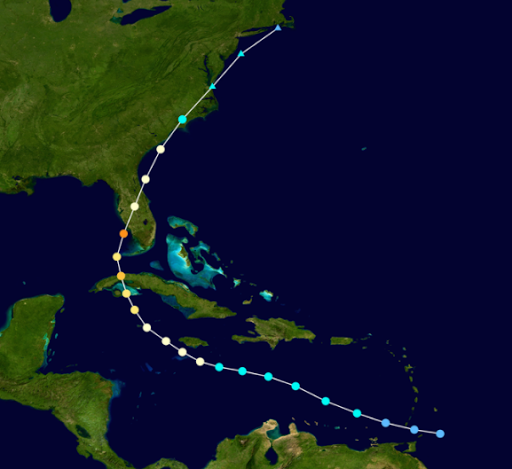 I’ll be offline Saturday and do a full update on Saturday evening. All the info you need is on www.spaghettimodels.com and of course the Hurricane Center itself that has a variety of maps and cones not just the one that the media always shows.

December…. Winter Showing Up But Not Bringing the Gift of Snow Just Yet… What Kind of Weather Do You Wish For……..???