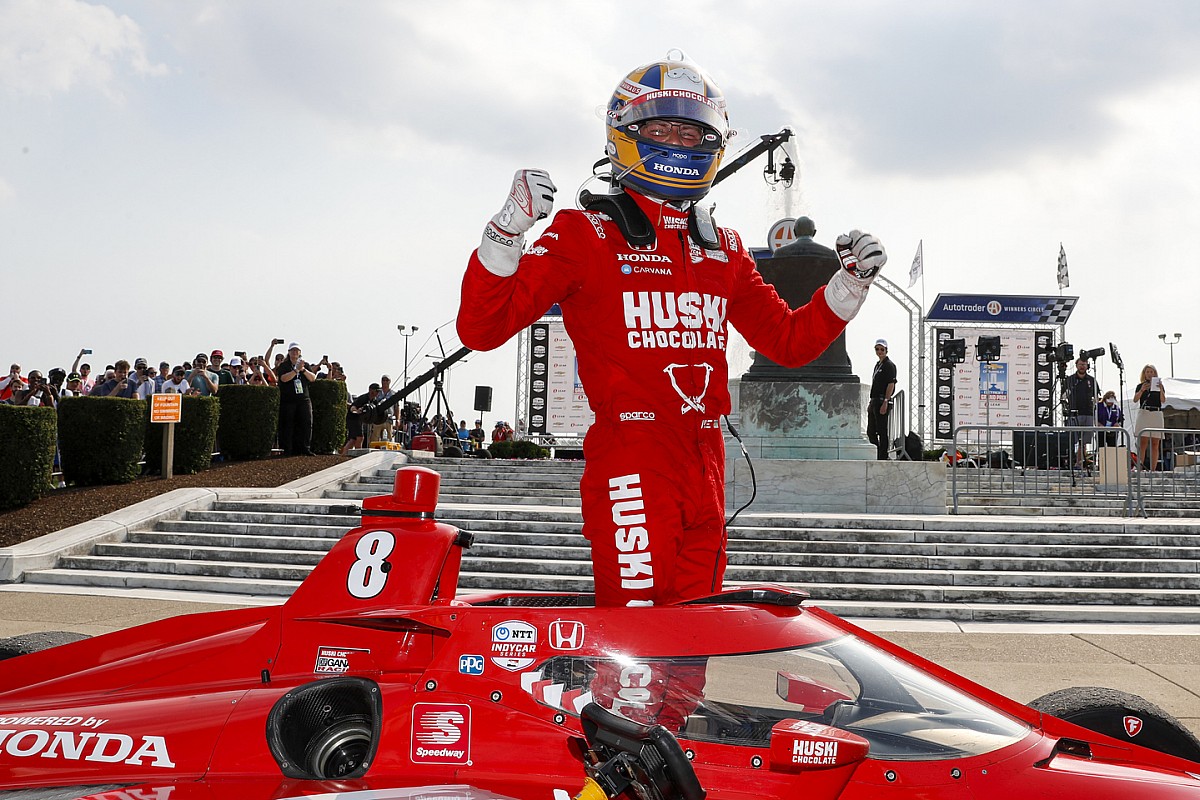 Power and Ericsson had been enjoying an entertaining scrap in the second half of the race, and the pair had edged away from Ed Carpenter Racing’s young charger Rinus VeeKay when the race was brought under its second red flag with five laps to go for Romain Grosjean’s shunt.

The field came down pitlane to wait out the delay but in the intense heat, Power’s Penske-Chevrolet failed to re-fire, and Ericsson was able to control the last four laps of the restarted race, pulling away from Takuma Sato immediately and then the VeeKay vs. Pato O’Ward battle for second.

It was the Chip Ganassi Racing-Honda driver’s first IndyCar win, it came at the same venue in which he scored his first podium two years ago and he became the seventh winner in seven races in the 2021 NTT IndyCar Series.

Explaining his race strategy from 15th on the grid, Ericsson said: “We started on the sticker reds, tried to stretch that stint as long as possible, was able to do that in a good way without losing the tires.

“The guys did good pit stops all day. Obviously the [first] red flag came out [for Felix Rosenqvist’s shunt], which was good for us. For our strategy it really helped. During the red flag I knew we were P2 on strategy behind Will.

“After the red flag, I felt stronger than Will, but he was driving very well and defending whenever I had runs on him. I was trying to be putting pressure on him and making him do mistakes. Felt like we had some more pace, but just couldn’t find a way by.

“Then, yeah, the last red flag, first it was a bit frustrating, but then I thought that this is our opportunity to win this race. Really fired up to try to go for it, try to get by Will. I felt like we were a bit stronger in the beginning of stints. I thought we could have a chance to get by him on the restart towards the end there.

“Unfortunately he had that problem, which I feel bad for him. He did a great job today.

“But we’ve had some bad luck these last couple years. I felt like it was about time we had some good luck, so I’ll take it. Just had to finish it off with clean restart and clean laps. I think I did a really good restart, then just control it till the end.

“Also Felix, I hear he’s okay after that nasty crash. A good friend of mine. I’m glad to hear that and I hope that’s still the case.

Asked what went through his head as he saw the #12 Penske crew failing to fire up Power’s car, Ericsson replied: “Obviously you don’t want to see someone have a problem like that, especially he was leading the race. I was really fired up to try and get to him on that last restart because I’ve been saying that this year I want that first IndyCar win. That’s highest on my list.

“I was fired up when the red flag came out because I knew I would get a chance to try to get by him. Like I said, you never want to see anyone have a problem, but I’ll take it!…

“The immediate thing is that, ‘This is my day, this is my day. This is the day I’ve been working eight years [for]. I had some bad luck the last couple years. The first red flag was good luck for me. The second red flag and what happened with Will, it was luck.

“But also we performed. We were fast. We did everything right in the pits, the restarts. We made passes, overtook people. Yeah, we had some luck, but we also delivered. It was just one of those things.

“I feel bad for Will because he did a tremendous day. But today was our day.”

Ericsson’s previous win had come driving for DAMS in GP2 (now Formula 2) back in 2013, and he reflected on the barren years, as he struggled along in backmarker cars in Formula 1, with Caterham, then Sauber, before coming to IndyCar in 2019 with what is now the Arrow McLaren SP team.

“I think back then I was going through the junior categories, trying to get to F1, I was winning races pretty much every year, going up the ranks. It was something that you were sort of used to and targeting. Then that’s a tough thing with European racing: when you reach the top level like I did in 2014 to F1, I was in smaller teams that didn’t have the resources to compete for wins.

“Then you as a driver, you sort of forget that feeling to fight and go for the wins. It was not until I went to IndyCar that I realized how much I missed that feeling to go into a weekend and have the mindset to try to win, try to beat everyone. That’s something I really, really enjoy here in IndyCar.”

After just one year with the Sam Schmidt/Ric Peterson-owned team, Ericsson joined Ganassi last year, but had not scored a podium for CGR until today.

“I’ve worked very, very hard,” he said. “I think if you ask the team, I’ve been working very hard to try and learn as much as I can, I have great teammates to learn from. That’s helped me a lot.

“But still to be able to get everything together, to win in IndyCar, I think it’s one of the toughest things you can do. You don’t only need to be fast in IndyCar: you need to do all the things right, you need to have the team behind you, the pit stop strategy, setup. It’s a tough series to win in.

“It does mean a lot. I missed this feeling so much, it’s crazy… I think you definitely lose some confidence. That’s the thing, you need to be mentally strong and believe in yourself, believe in your abilities. I’ve done that. I’ve been strong. I think that’s one of my strengths, that I’ve been having good mental strength.

“But for sure it’s tough. I think it would be tough for anyone to go eight years without winning a race when that’s what you do! My job is to win a race, and I haven’t done it for eight years! Of course it’s going to take a toll on you. Today I think I showed that I can do it. It’s going to help me a lot going forward.”

Staycation like a Royal with The St James’s Hotel and Club and Great Fosters, Surrey

Record High in 2020, Despite Lockdown – Watts Up With That?

Staycation like a Royal with The St James’s Hotel and Club...