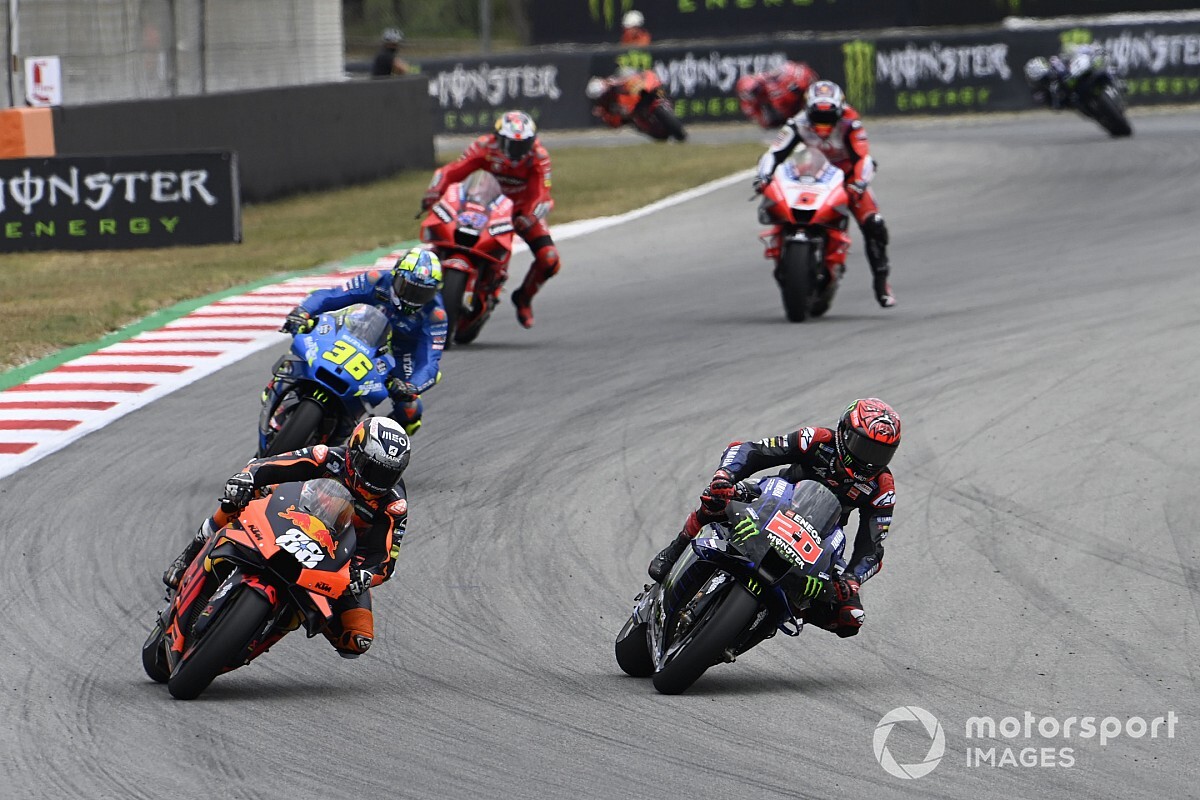 Quartararo’s Yamaha leathers came completely undone with around five laps of Sunday’s Catalan GP remaining, with the Frenchman seen discarding his chest protector while going through the Turn 3 right-hander.

The Yamaha rider – who ultimately finished fourth after being demoted from third for a track limits violation late on – was at a loss to explain the issue with his race leathers and noted Alpinestars was looking into it.

Opinion on Quartararo’s decision to continue with his race suit unzipped courted criticism, with double MotoGP champion Casey Stoner taking to Twitter to says the Yamaha rider should have been black-flagged.

Current FIM rules on safety equipment states: “The equipment must be worn, correctly fastened, at all times during on-track activity.”

Suzuki’s Mir – who was fifth in the race – doesn’t feel Quartararo should be punished for completing the race with his leathers open, but feels the way he discarded his chest protector should cop a penalty.

“What I see as very dangerous is throwing the breastplate, it’s plastic and it’s dangerous, there are bikes coming at 200 km/h from behind,” Mir said.

“Of course, that is punishable, I think it puts the other riders in danger, that’s how it is.

“We have to learn from this, I wouldn’t want them to throw a breastplate in my face in another race, we have to set an example with penalties.”

Johann Zarco, who was second at Barcelona, feels Quartararo’s actions would have warranted a black flag for disqualification “for his safety”.

“But if he just slide with an open suit, this can be so dangerous. So, a black flag for his safety can have sense.“

Honda’s Marc Marquez believes it would be “unfair” to have disqualified Quartararo, but concedes he should have pulled out as a matter of safety.

“We discussed it with the team,” Marquez said of the incident.

“I think it will come up in the Safety Commission, and I think it’s unfair if you black flag him.

“That’s what I think they should have done. Either you pull off, lose three or four seconds and tie your overalls, or you have to stop.”

Marquez’s Honda teammate Pol Espargaro added that he would have done the same as Quartararo had the issue befallen him.