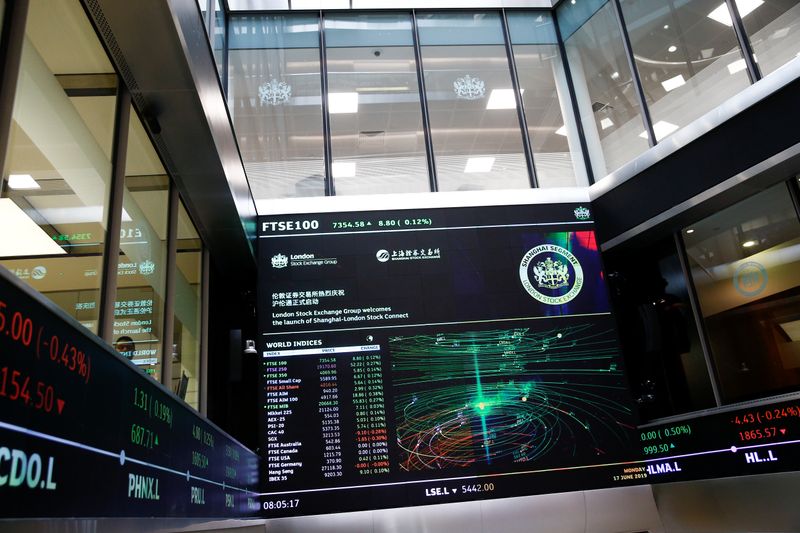 © Reuters. FILE PHOTO: A trading screen is seen following the opening of the markets by British Chancellor of the Exchequer Philip Hammond and Chinese Vice-Premier Hu Chunhua at the London Stock Exchange in London, Britain June 17, 2019. REUTERS/Henry Nicholls/Pool

By Saikat Chatterjee and Thyagaraju Adinarayan

LONDON (Reuters) – Think of an exclusive poker game where the minimum bet is close to $1 million. The stock-trading version, “dark pools” that host blockbuster trades, are pulling in major money in Europe.

Their rise has been swift.

On June 24, 2016 – the day after the Brexit vote – just 3% of trades on the London Stock Exchange’s Turquoise shares platform were carried out in its dark pool via so-called block trades, mega-bets of around $800,000 or more.

Fast forward about four years to Nov. 9, 2020 – another momentous day for markets, when Pfizer (NYSE:) was the first COVID-19 vaccine developer to announce it had produced an effective shot – and 58% of trades were executed in these giant blocks.

The ballooning interest is evidence that U.S.-style block trading of shares is “becoming truly mainstream” among European institutional investors, according to Robert Barnes, global head of primary markets at LSE Group.

The LSEG is one of a handful of European exchanges trying to grab a slice of the action, having seen dark pools – traditionally run by investment banks or specialised platforms – siphon off growing trading volumes from their industry.

Pan-European exchange operator Euronext told Reuters it was preparing to launch its own business – Euronext Block – in coming months.

Block trades are so big – EU regulators stipulate at least 650,000 euros ($795,000) for large-cap stocks – they are, in practice, too costly for investors to make on mainstream exchanges where they can move the market and take a big hit on price.

Such “off-exchange” deals accounted for 4.2% of overall EU monthly trading volumes in February, up from 1.5% in January 2017, according to investment bank and research firm Rosenblatt Securities. Over that period, block trades in the more mature U.S. market eased from 9.6% to 6.7%.

Thus business is brisk for dark pools, which match buyers and sellers away from wider market and regulatory scrutiny.

Goldman Sachs (NYSE:) told Reuters its European block-trading volumes in the first quarter of 2021 had already surpassed full-year levels for 2020, which itself had doubled from 2019. It declined to disclose volumes. Another top U.S. bank confirmed similar rates of European growth on condition of anonymity.

Among other leading venues, more than $7 billion worth of shares were traded on CBOE’s European block-trading platform in April, and more than $10 billion at Liquidnet, according to data from broker and analytics firm Instinet.

Jason Lenzo, head of trading at London-based Russell Investments, said if block-trading volumes continued to rise, investors had to adapt. Russell has increased its share of block trades from 30% of all trade volumes a couple of years ago to the “mid-30s” now, he added.

“If there is more block trading, then you certainly need to shift your trading strategy,” he said. “You want to be in the market where the liquidity is focused.”

The shift towards the dark has alarmed some mainstream European stock exchanges, which are lobbying for tighter controls on such rival venues, saying they hinder transparency.

Prices of deals on dark pools are only shared with the wider – or “lit” – market after the trade takes place, unlike on exchange where it is displayed until it’s executed.

Germany’s Deutsche Boerse (DE:) said dark pools trading could have a negative impact on price discovery, when it came to smaller-sized orders, and that this would eventually push up trading costs for issuers and investors.

“Trading in the dark should be limited in order not to harm price formation in the long run,” said Sandra Vincent, head of market structure and regulation at Deutsche Boerse Cash Market.

EU regulators are concerned too. With MiFID II in 2018, they ruled that only 8% of a stock’s average trading volume can be transacted via dark pools and set minimum limits for the size of each trade that can preclude all but the biggest fish.

Yet the LSE’s dark pool has become an important source of earnings since Britain’s decoupling from the EU and its rules.

Trading on Turquoise, a trading venue majority-owned by the LSE, doubled to around 241 billion euros last year compared with 2015, when the exchange started reporting full-year volumes for the unit. Over the same period, volumes on the LSE’s main bourse declined 18% to 1.4 trillion euros.

The block-trading business received a fillip in December when regulators in Britain, now competing with the continent for investment money, said international investors would be allowed to trade near-unlimited amounts of shares in the country.

Euronext told Reuters it was taking a different tack. Rather than compete with existing players more focused on large-cap stocks, it said it was going to launch a block-trading venue for small and mid-caps, which it described as “underserved and neglected” in European trading as a whole.

“In the next few months, I can’t give a date yet, we’re just onboarding offer to customers, we’re going to be launching something called Euronext Block,” said Simon Gallagher, head of cash equities and derivatives at Euronext.

“In the midcaps, it could be 10,000-euro order sizes, which is equivalent to a blue-chip trade in the lit market.”

The cost savings offered by block trades are a big draw for the European investment industry, where many are already facing higher regulatory scrutiny over client fees.

A block trade would have saved an investor nearly 90% of the transaction cost they would otherwise incur, according to an analysis at the end of 2020 by trading platform Instinet, which runs a European dark pool called Blockmatch. It defines transaction cost as “the price achieved for an order vs the price available at the time you decided to make a trade or more importantly vs the expected cost”.

“In the last 12 to 18 months, we have been living in a market environment where the cost of trading has gone up as spreads have widened,” he added.

With trading concentrated at the start and end of each day, increasingly thin-volume markets make transactions expensive and almost impossible to hide. Bid and offer prices are often far apart, meaning even medium-sized trades can move markets.

“Some of those spreads can be 20 basis points wide or some can be as much as 500 bps wide,” said Lenzo at Russell Investments.

In the United States, block trades have been part of the investment scene for the best part of two decades. Many exchanges operate a dual strategy, with separate platforms focused on retail and institutional investors.

Problems can arise when these markets collide, though, as happened this year when the implosion of Archegos Capital led to institutional investors dumping large amounts of shares via dark pools. The news leaked, fuelling a selloff across the broader mainstream market, and led to some retail investors questioning why big players were party to sensitive information first.

U.S. regulators are not stepping up scrutiny of dark pools directly, but are looking into the relationship between investment banks and hedge funds.

Ben Stephens, global head of product management at Instinet, said the advantages of block trading, particularly electronic midpoint blocks and guaranteed prices from dealers, meant the practice was here to stay in Europe.

“The opportunity cost of not trading a block vs trading in the lit market is so high that it means asset managers will continue to choose to execute blocks electronically where they can,” he added.