The Abt Cupra machine spectacularly crashed out of the maiden event in Saudi Arabia after a collision with Chip Ganassi racer Kyle Leduc in the second semi-final.

Deadlines to ship the car aboard the St Helena ‘floating paddock’ across to the Lac Rose region near Dakar meant the Odyssey 21 was only repaired on site on Thursday.

But Ekstrom sent it to the top of the timing screens with a 4m50.580s effort around the four-mile beach course peppered with more tight corners compared to the AlUla run in Saudi.

But it was the Andretti United squad that earned the bragging rights as the fastest team, with 2019 World RX champion Timmy Hansen combining with Catie Munnings to lead.

The total time, including a shorter 40-second mandatory driver change, added up to 11m29.863s.

This included a sizeable save from Munnings when she clipped a ridge and flicked the rear axle of the car several feet into the air.

That narrowly beat the 11m31.579s effort of Rosberg X Racing, with Johan Kristoffersson and Molly Taylor having won the April meeting in Saudi Arabia.

X44 finished only a further 0.9s in arrears, but the run included a practice start for Loeb’s team-mate Cristina Gutierrez – the spare-time orthodontist having come to a complete stop on the beach front for a practice launch. 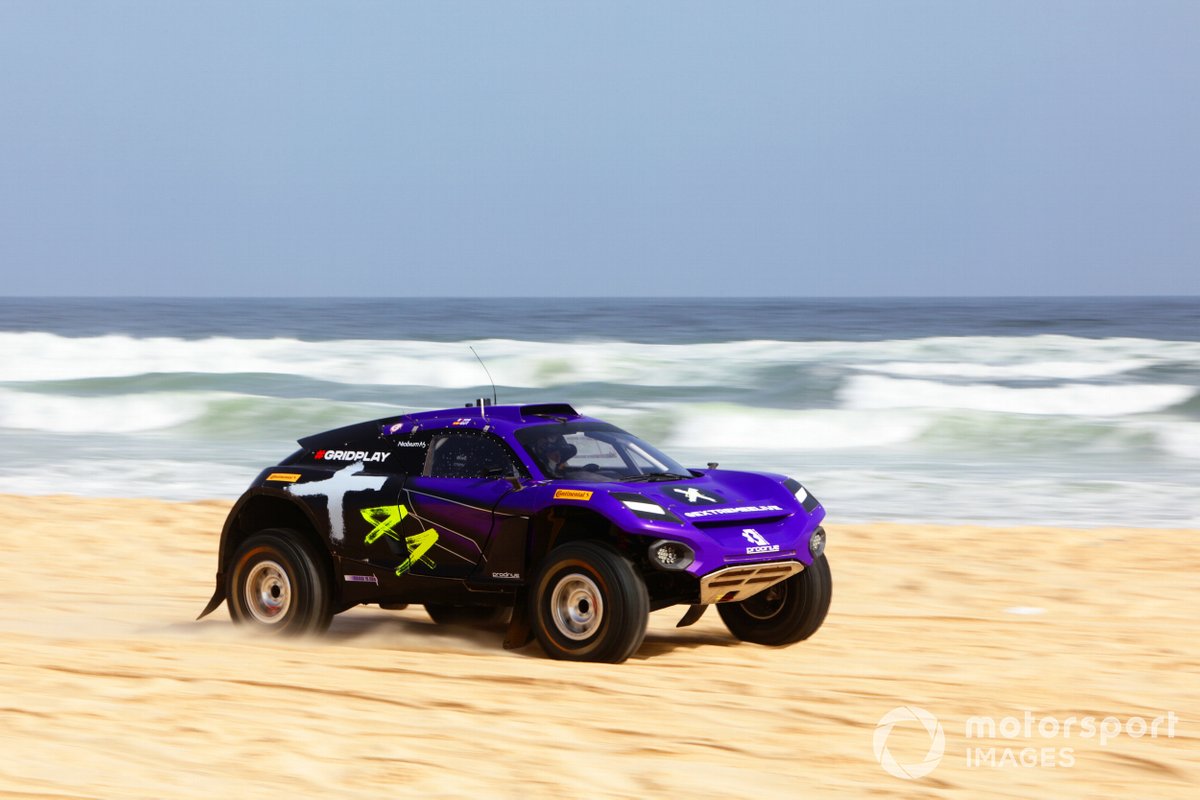 The Chip Ganassi Racing duo of Sara Price and Leduc ran to the fourth fastest combined time, the American outfit having suffered a torrid outing in Saudi when Price stopped on track in shakedown before Leduc was involved in a roll and then rear-ended the Abt Cupra machine.

The Spaniard, whose throttle stuck open, also stopped to give Loeb a lift back to the paddock.

Sainz was vocal in the drivers’ briefing against the decision to reduce the pitstop time from 45s, citing his age when it came to running through the deep sand.

Kevin Hansen, in to replace Jenson Button at JBXE Racing, combined with Mikaela Ahlin-Kottulinksy to finish sixth ahead of Jamie Chadwick and Stephane Sarrazin.

The Veloce Racing outfit worked in tandem with Abt Cupra to repair its Odyssey machine after Sarrazin rolled in Saudi and the radio aerial punctured the roll cage.

While Ekstrom ran to the fastest individual time, a tepid 6m12 lap from experienced GT racer Claudia Hurtgen dropped the Abt Cupra team down to eighth overall.

Oliver Bennett and Christine Giampaoli Zonca, first on the track, completed the order aboard the Hispano-Suiza machine.