The theme for this week is ‘it’s too soon to say’:

– results of US Election on Tuesday – pending

– full extent of Hurricane Eta in Central America on Tuesday/Wednesday/Thursday – pending. Although unfortunately at least 70 people have lost their lives in this one so far. 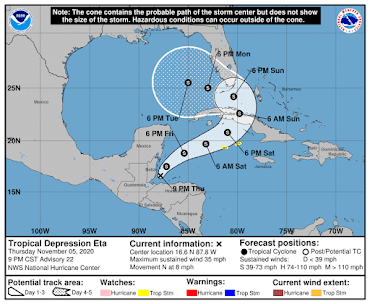 Winds are officially 35mph, central pressure is 1004mb, which makes it a Tropical Depression (TD range: 17-38mph). It is forecast to become a Tropical Storm soon and remain that way until it gets to Cuba on Sunday and then heads up towards Florida.

There is some convection as we can see in the satellite imagery, but it’s a bit of a messy blob:

There isn’t a lot of very well developed vorticity in the troposphere at any level. Here’s the map from the lowest level which has the ‘strongest’ signal – it’s a little ‘redder’ just off the northern coast of Honduras so I think that is what the NHC is picking up as the Tropical Depression.

We’ll see tomorrow if it becomes any better developed as it moves away from the coast. The water is certainly warm enough although there is some wind shear.

DISCLAIMER:
These remarks are just what I think/see regarding tropical storms – not the opinion of any organization I represent. If you are making an evacuation decision, please heed your local emergency management and the National Hurricane Center’s official forecast and local weather service announcements. This is not an official forecast. If I “run away, run away” (Monty Python), I’ll let you know.
————————————–